Under a White Sky: The Nature of the Future by Elizabeth Kolbert: A review 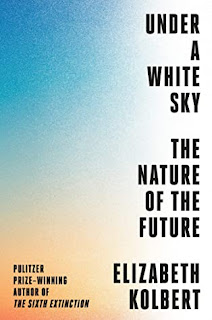 The white sky of the title would come about because we have sprayed light-reflective particles into the atmosphere making the blue skies look white and theoretically helping to deflect solar radiation thereby cooling the planet. It's just one of the ideas for geo- or bioengineering that are explored in Elizabeth Kolbert's latest book. Our species has been so successful in modifying the environment that we have become the dominant influence on the natural world and we have named the geological epoch in which we are now living for ourselves. We are living in the Anthropocene and our hubris, it seems, knows no bounds.

Today's scientists are exploring ways to affect the Nature of the future in ways that will correct the damage that we have already done and continue to do to it. Thus, they consider ways to shield the planet from solar heat, control and eradicate invasive species, or direct the flow of rivers in what we consider to be more beneficial or less destructive ways. And all of this is to correct what we have previously done.

A prime example is the Asian carp. The fish was introduced to American waterways in 1963 as a nontoxic way to help clear aquatic weeds. The carp are voracious feeders and in areas, they outcompeted native species until the natives were virtually extirpated. They spread throughout the waterways of the Midwest and up to the Great Lakes. Nearly sixty years later, we are in a battle to clear them out.

The Mississippi River that bisects the country is one of those battlefronts. It has also long been a tinkertoy for the Army Corps of Engineers as they build levees, dredge, and otherwise attempt to direct its flow. Those efforts all too often have had unintended consequences. Just ask New Orleanians.

For me, one of the most fascinating sections of Kolbert's book dealt with the pupfish, rare species of fish endemic to California. There are several distinct species but the Owens pupfish is one of the rarest of the rare and the efforts of scientists and conservationists to protect and preserve the little fish, as related by Kolbert, are nothing short of heroic. I particularly liked the response of one of the scientists who was asked, "What good is a pupfish?" He replied, "What good are you?" Indeed.

Kolbert goes on to discuss the sad history of what we have done and are doing to the coral reefs of the world and of efforts to breed corals that are more resistant to higher temperatures. This is one of those bioengineering projects that hopes to correct or ameliorate the damage we've done. Another is an attempt to essentially breed the invasive cane toads of Australia out of existence. Engrossing stuff.

Kolbert tells all of this in a straightforward way without any alarmist tendencies. She is very good at presenting this timely information in a way that can be absorbed by her readers. At one point, she quotes Horace from 20 B.C.E. He wrote: "Drive out nature though you will with a pitchfork, yet she will always hurry back, and before you know it, will break through your perverse disdain in triumph." Or as a character in a movie once said, "Nature will find a way."