Showing posts from August, 2015
Show all

And nothing ever changes... 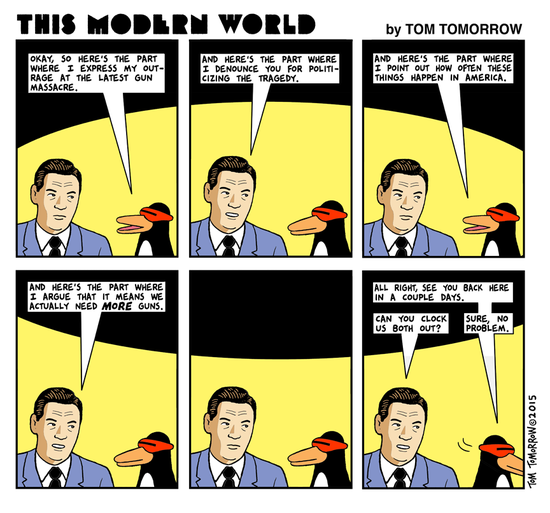 August 30, 2015
I have this old much-thumbed, dog-eared book with yellowing pages that contains selected poems of Pablo Neruda, the great Chilean poet who was winner of the 1971 Nobel Prize for Literature. It is a bilingual edition. The poems are presented in their original Spanish and with English translations. There are many of his poems that are favorites of mine - poems that have meant something important to me at various times in my life. But most of them are quite long, too long to be featured here. However, I did find one that is fairly short and that I especially like for its sumptuous imagery. Neruda's poems seem to flow easily, naturally. He was endlessly inventive, weaving poetry of both surreal and real images, encompassing the earthly as well as the metaphysical. This is an example of that. Some Beasts (Algunas Bestias) by Pablo Neruda It was the twilight of the iguana: From a rainbowing battlement, a tongue like a javelin lunging in verdure; an ant heap treading t
4 comments
Read more 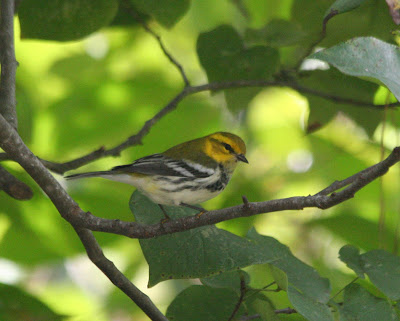 A roundup of the week's news of birds and the environment : Fall migration is picking up steam. Colorful warblers like this Black-throated Green are passing through my backyard. *~*~*~* This week the nation marked the tenth anniversary of the storm called Katrina and the human and ecological disaster that ensued from its passing. The lives of thousands of people were brutally disrupted and many of them were ended, but the damage to the ecosystem was enormous also. Ten years later, Nature still has not entirely healed itself .   *~*~*~* Wind turbines have such promise as a means of producing renewable and sustainable energy without destroying the Earth in the process, but it has to be acknowledged that they present a potentially deadly hazard to birds and flying mammals. Eagles seem to be particular victims of wind farms in the West. Researchers are continuing their work to try to find ways to ensure that Golden Eagles , as well as other birds, can coexist with the ener
3 comments
Read more

Dune by Frank Herbert: A review

Dune by Frank Herbert My rating: 5 of 5 stars This year marks the fiftieth anniversary of the publication of Dune , Frank Herbert's epic science fiction novel, winner of many awards and considered by some to be the best science fiction book ever written. Thus, 2015 seemed the appropriate time to once again return to Arrakis, the planet that once mesmerized my reading self. I first read the book about 35 years ago and it completely captured my imagination. The world described by Herbert is some 21,000 years in the future and the human race is now living on countless habitable planets. This universe is ruled by a collection of aristocratic Great Houses and they, in turn, owe their allegiance to Padishah Emperor Shaddam IV. This society has seen fit to prohibit artificial intelligence and advanced computers, and, instead, humans have adapted their minds to effectively become those advanced computers. They are capable of extremely complex tasks, including mental computing. The Bene
6 comments
Read more

August 27, 2015
In December of 2010, I wrote this post about the complicated effects on weather that the warming of the planet generates in various places. Those effects continue and are intensifying as the underlying causes of global warming continue to go unchecked. The effects on the deniers of global warming seem to be intensifying as well. Thus, every winter, as soon as the first snow falls, we can count on the usual suspects to start chortling about all those "liberal lies" about Earth getting hotter, and we can expect some of our elected representatives to throw snowballs around on the Senate floor , claiming that that proves that "global warming is a hoax."  Of course, these are the deniers that live in the northern hemisphere. They never mention what's going on in the other half of the planet, the southern hemisphere, when there is snow on the ground in Washington. But then perhaps the southern hemisphere doesn't exist in their world - at least not in thei
Post a Comment
Read more 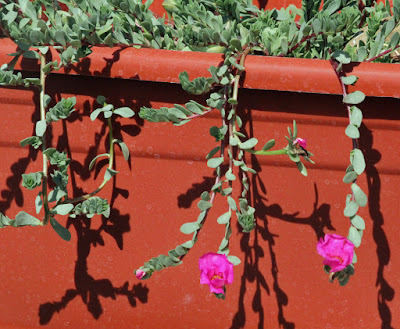 Common purslane ( Portulaca oleracea ) grows throughout many regions of the world. It has been so widespread for so long that its beginnings are a bit hazy, but it is believed to have originated on the Indian sub-continent. It is now found in the wild throughout the Old World, and there is evidence that it reached the Americas in the pre-Columbian era. It is now well naturalized in all of these places, including in my backyard. Purslane is a close cousin of the ornamental succulent called portulaca which many gardeners grow from seed or purchase plants from nurseries. It is known by many common names, such as hogweed, pursley, moss rose, pigweed, and verdolaga. Though it is considered by many to be a weed, it can be quite pretty and it has surprising nutritional and health benefits. Purslane can serve as a leafy green vegetable, good in salads. It is rich in dietary fiber, vitamins, and minerals. The fresh leaves of the plant contain more omega-3 fatty acids than any other lea
Post a Comment
Read more

People who know me well know that I am an unapologetic Bruce Springsteen fan. His music speaks to me, as it does to so many people around the world, in a way that seems to reach right through to the soul. Today is the 40th anniversary of what might be termed the phenomenon of Springsteen and the E Street Band. Forty years ago today, the album Born to Run was released, and the rest, as they say, is history. Many publications have marked the anniversary with articles about it, including the Slate.com article which I read. It wasn't his first album. He had had a couple of them before but neither had made much of a splash. Born to Run was not a spur of the moment album. Ever the perfectionist when it comes to his music, he took a long time to get it just right. For example, it took him six months during the spring and summer of 1974 to record just one track, the title song. A typical song on a modern album might take up to three hours to get just right. Obviously, Springsteen
Post a Comment
Read more

The Maltese Goddess by Lyn Hamilton: A review

The Maltese Goddess by Lyn Hamilton My rating: 4 of 5 stars Lara McClintoch is the half-owner of an antiques shop in Toronto. One of her customers, an internationally famous architect and world-class jerk, wants to hire her to go to Malta to set up his newly built house there. He wants her to oversee the delivery and placement of furniture and see that the house is ready for a big soiree that he's planning to entertain various highly important people. Lara, with some misgivings, agrees to take the assignment, but when she arrives in Malta, she finds the house still not completed and workmen in a feverish race to get everything done on time. Soon after she arrives, strange things start happening. She sees a mysterious hooded figure at the edge of the garden at night. Then a cat is murdered and left on the property. The brake lines on the car she had been given to use are cut. And perhaps creepiest of all, an odd and obnoxious man whom she first saw on the plane keeps turning up e
2 comments
Read more

Poetry Sunday: The Road Not Taken

August 23, 2015
It has been called the "Great American Poem" and "America's Most Popular Poem," even though those two appellations may be contradictory. David Orr of The New York Times Book Review has now written a new book about it in which he argues that it may also be one of the most misunderstood of American poems. Orr's book, like the poem, is called The Road Not Taken .  Many, probably most, readers take Robert Frost's most famous poem at face value. A traveler comes to a fork in the road and ponders which one he should take. Even though they both seem equally fair, he decides to take the road less traveled and that in the end made all the difference to his life. A closer and more in-depth reading of the poem offers another meaning. It can be read as a joke on the rugged individualist myth, as I pointed out when I featured this poem once before on Poetry Sunday. The traveler chooses at random between two equal roads, but later in his life, when he tells t
2 comments
Read more 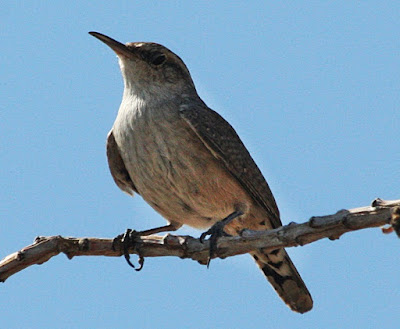 A roundup of the week's news of birds and the environment : Rock Wren photographed at Big Bend National Park. *~*~*~* Earth just keeps on getting hotter. July was the hottest month since the National Oceanic and Atmospheric Administration started keeping records of the planet's temperature back in 1880. Last year was the warmest year on record, but it is now almost certain that 2015 will beat it out for the record. *~*~*~* A trail camera in California has documented the presence of a litter of wolf cubs in the state. Gray wolves historically lived in the state but were extirpated and had not been seen there since 1924 until the now famous wolf OR7 was photographed there in 2011. That wolf is now living and breeding in Oregon, but these pups apparently come from a newly formed California pack. *~*~*~* A rare Philippine Eagle was rescued after being shot three years ago. It was rehabilitated and finally returned to the wild two months ago. Now comes the sad ne
2 comments
Read more 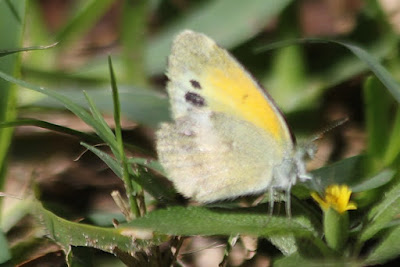 Hallowed Bones by Carolyn Haines My rating: 4 of 5 stars And here's another of my guilty pleasure reads for the summer - the fifth entry in Carolyn Haines' Sarah Booth Delaney series. It was great fun to read and, indeed, may be my favorite in the series so far. Sarah Booth Delaney's private investigation business in the little delta town of Zinnia, Mississippi, now has an actual business office. She has set up a couple of rooms of her family's plantation home, Dahlia House, as offices for herself and her partner, Tinkie. There's even a place for a receptionist's desk, just in case the business ever grows to the point that it needs one. Sarah Booth's latest case begins when she is contacted by a nun from New Orleans. The nun is a friend of a woman who is now being held on a warrant from New Orleans in the local Zinnia jail. The woman, Doreen, is a spiritualist and alleged faith healer with a large following in New Orleans. She had a baby who had severe bi
3 comments
Read more

This is one of the two most exciting times of the year for birders. The first, of course, is spring migration when wave after wave of bright and noisy songbird migrants pass through on their way north to their nesting grounds. The second is fall migration which is a much quieter affair. Fall migrants do not bear the bright colorful feathers that they wore in spring when they were ready to attract mates and get on with nesting. Moreover, they are much more silent for the same reason. They are not looking for a mate; they are looking to safely get to their winter homes. They are entirely focused on that goal. The result is that, unless one is out specifically looking for the birds, thousands can easily pass through unnoticed in a matter of days. Most of the fall migrants pass through relatively quickly. They don't tarry with us for long. Hummingbirds are something of an exception to this rule. They may stick around for days or even weeks while they fatten up to ready themselves f
4 comments
Read more
More posts