Showing posts from June, 2016
Show all

June 30, 2016
I live smack dab in the middle of one of the most conservative, i.e. right-wing, counties in Texas, which means it is one of the most conservative counties in the country. It's very frustrating in so many ways, but most of the time, things rub along pretty amicably.  And then something happens that makes one question just what kind of neighbors one has. Such an event occurred almost five years ago, at the end of 2011. ~~~    Friday, December 30, 2011 Crazy neighbors A few miles from where I live, a house burned last week. It was what the local newspaper called "a historic homestead" that had been in the family of the man who owned it since 1927. The house burned to the ground even though the fire department was on the scene. The firemen were unable to get near the house because it contained an estimated  100,000 rounds of ammunition ! As the fire spread, the ammunition started exploding and popping in all directions, making it dangerous for the firefi
4 comments
Read more 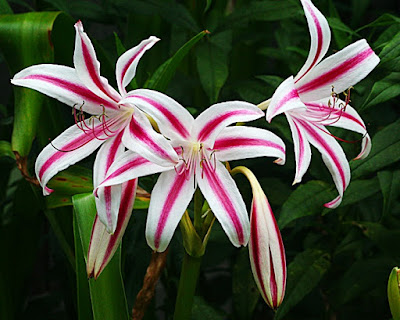 Milk and Wine lilies are large crinums that have bright white blossoms with showy burgundy stripes. They are staple parts of a classic Southern garden. Now, my garden isn't exactly classic, but my Milk and Wine lilies are a colorful part of my summer garden and this is the time when they are at their showiest. Gardeners often receive Milk and Wine lilies as passalong gifts from other gardeners, but I actually got my start of them from the Southern Bulb Company , a company that specializes in saving and propagating traditional Southern bulbs, of which crinums are perhaps the most traditional.  Crinums come in many different sizes and shapes. Their main colors are red, pink, and white. There is a favorite saying among gardeners that "No crinum has ever died," and it seems almost true of these hardy plants. They thrive as far north as zone 7, some types as far as zone 5. They can flower several times a year, most often after a heavy rain, but they are also able
10 comments
Read more

The Hollow Hills by Mary Stewart: A review

The Hollow Hills by Mary Stewart My rating: 4 of 5 stars I have set myself the goal of reading Mary Stewart's Arthurian Saga series this summer. This is the second book in that series. Once again we see events through the eyes of Merlin the Enchanter, as he narrates the story for us. We begin with Merlin traveling through the Mediterranean area after having safely delivered the baby Arthur into the keeping of those who will protect and raise him over the next several years. When Arthur is six years old, Merlin feels the call to return to England and to take up his own task of teaching and protecting the child. He finds Arthur strong and healthy and growing into the kind of human being that he had hoped to see; the kind of man who can be a brave, just, and benevolent king. The story of Arthur is so well-known, so ingrained in our cultural consciousness, that it seems pointless to spend space here on exposition. Stewart has taken those well-known facts, both historical and legend
4 comments
Read more

June 26, 2016
As one who has spent many summers in the country, I found the imagery of this poem especially evocative. Country Summer    by LÉONIE ADAMS Now the rich cherry, whose sleek wood,  And top with silver petals traced  Like a strict box its gems encased,  Has spilt from out that cunning lid,  All in an innocent green round,  Those melting rubies which it hid;  With moss ripe-strawberry-encrusted,  So birds get half, and minds lapse merry  To taste that deep-red, lark’s-bite berry,  And blackcap bloom is yellow-dusted.  The wren that thieved it in the eaves  A trailer of the rose could catch  To her poor droopy sloven thatch,  And side by side with the wren’s brood—  O lovely time of beggar’s luck—  Opens the quaint and hairy bud;  And full and golden is the yield  Of cows that never have to house,  But all night nibble under boughs,  Or cool their sides in the moist field.  Into the rooms flow meadow airs,  The warm farm baking smell’s
8 comments
Read more 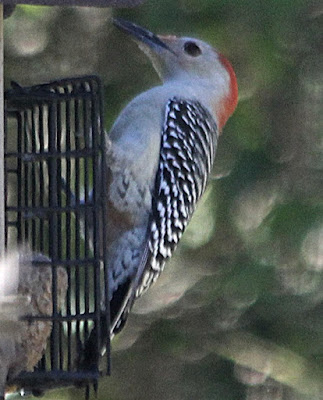 A roundup of the week's news of birds and the environment : Another of my favorite backyard birds, the Red-bellied Woodpecker . You can see just a tiny glimpse of his eponymous belly in this shot. *~*~*~* Citizen science projects have been proved to be a very effective way to collect massive amounts of data that can be collated and analyzed to discern patterns that aid scientists in drawing conclusions and planning actions. Now the National Audubon Society is instituting a new pilot project aimed at tracking how birds are changing their ranges in response to climate change. Initially, participants will be counting Mountain , Eastern , and Western Bluebirds in their wintering and breeding seasons. *~*~*~* In addition to all the other negative effects of the UK's Brexit vote, it could potentially be extremely detrimental to funding of scientific research in the country.  *~*~*~* The Center for Biological Diversity has compiled a new "Systematic Review of Bi
6 comments
Read more

Before the Fall by Noah Hawley: A review

Before the Fall by Noah Hawley My rating: 5 of 5 stars Noah Hawley. Now, why did that name seem so familiar? Google had the answer, of course. He's the writer/producer/showrunner of the wonderful FX series, Fargo , which I have thoroughly enjoyed now for two seasons. Who knew that he was also a novelist? Well, maybe you did, but I didn't. Before the Fall is, apparently, his fifth book and it is a winner, maybe even one of those summer reading blockbusters that happen every so often. It has a compelling plot, interesting characters, and is the essence of a page-turning thriller. The story is this: One August night in 2015, a private plane takes off from Martha's Vineyard, carrying eleven people; the head of a major cable news network (obviously based on Fox News) and his wife, daughter and young son; his friend, a soon-to-be indicted business executive/dirty money launderer and his wife; the "body man" security guard of the TV executive's family; the pilot,
6 comments
Read more

LaRose by Louise Erdrich: A review

LaRose by Louise Erdrich My rating: 5 of 5 stars Louise Erdrich is a national treasure. That's my considered opinion. Every book of hers that I've read has shone with the light of a transparent power, a use of language that is deceptively plain but rich and transformative. Like her Native American ancestors, it seems that she has taken from the anglo culture and language that which she can use, but she has retained the best parts of her heritage that help her to make sense of those things and to keep them from overpowering the sensibilities of the unique society from which she came. She does it all again in LaRose , her latest novel. LaRose is the third book in a sort of loose trilogy that started with The Plague of Doves , continued with The Round House and now reaches (perhaps) a conclusion with this book. Or perhaps there will be more books set in this community of the Indian reservation, a place where different characters and their ancestors recur and where the past se
6 comments
Read more 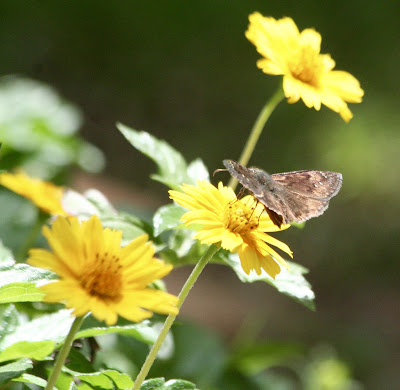 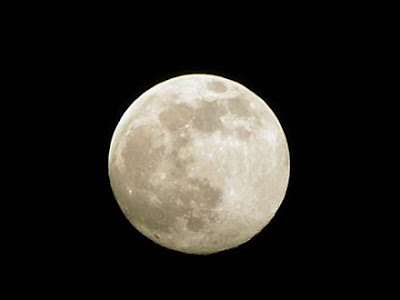 This date marks the unusual coinciding of two astronomical phenomena: the summer solstice and the strawberry full moon . Although it has felt like summer for weeks now, the solstice actually arrived this afternoon at 5:34 Central Daylight Time. Temperatures here were above 90 degrees Fahrenheit at the time, but in some places in the Southwest, they were well above 100 already. It looks to be another record-breaking three months of temperatures. For the first time since 1967, the summer solstice came on the same date as the full moon, known this month as the "strawberry moon" according to Algonquin tradition. The tribes gave names to each month's full moon and since June's came at the height of the season when strawberries were harvested, it naturally became the strawberry moon. The moon actually attained 100% fullness this morning at 6:02 our time, almost twelve hours before the summer solstice, but if the skies are clear where you live, you can still enjoy the
4 comments
Read more

I believe that poet Edgar Guest must have had his tongue firmly planted in his cheek when he wrote these lines! Father by  Edgar Guest My father knows the proper way  The nation should be run;  He tells us children every day  Just what should now be done.  He knows the way to fix the trusts,  He has a simple plan;  But if the furnace needs repairs,  We have to hire a man.  My father, in a day or two  Could land big thieves in jail;  There’s nothing that he cannot do,  He knows no word like “fail.”  “Our confidence” he would restore,  Of that there is no doubt;  But if there is a chair to mend,  We have to send it out.  All public questions that arise,  He settles on the spot;  He waits not till the tumult dies,  But grabs it while it’s hot.  In matters of finance he can  Tell Congress what to do;  But, O, he finds it hard to meet  His bills as they fall due.  It almost makes him sick to read  The things law-makers s
9 comments
Read more 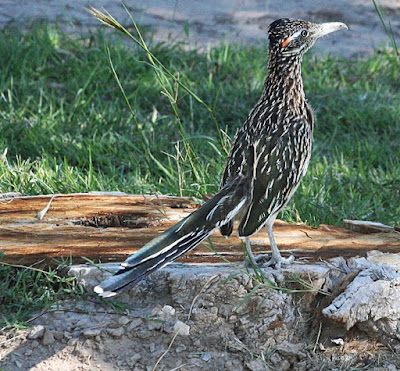 A roundup of the week's news of birds and the environment : Greater Roadrunner (Geococcyx californianus), iconic bird of dry lands in the West, but often seen in our somewhat wetter area as well. I photographed this one in Big Bend National Park in West Texas. *~*~*~* This year is smashing climate records right around the planet. So far seven climate records have been set in 2016 and since last October, every single month has been the hottest on record. *~*~*~* In what Australian researchers say is the first documented extinction of a mammal species due to human-caused climate change, rising sea levels have wiped out a rodent that lived on a tiny outcrop in the Great Barrier Reef. The long-tailed, whiskered creature, called the Bramble Cay melomys, was considered the only mammal endemic to the Great Barrier Reef. *~*~*~* In good news for the critically endangered California Condor , it was announced that more chicks hatched and survived in the wild than the d
4 comments
Read more
More posts