Peaces by Helen Oyeyemi: A review 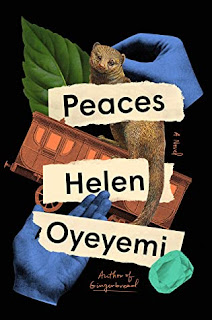 Helen Oyeyemi was born in Nigeria and raised in London. Now she lives in Prague. Her novels, as far as I can tell having now read two of them, are set in some other country of her own imagination. Place always seems to be ambiguous. In 2019, I read her book, Gingerbread, which began in a magical country called Druhástrana. The location of events in this work seems even more enigmatic, except that we know they happen on a train. It's a train called Lucky Day and at one time it was used in tea smuggling. And is tea smuggling a real thing? Who knows? In Helen Oyeyemi's world apparently, it is.

I have mentioned here before that when I commit to reading a book, I am going to read it all the way through, even if it turns out not to be an enjoyable experience. I know readers, including one who lives in the same house with me, who consider this a stupid philosophy. After all, life is too short for bad books. But I tend to choose my books pretty carefully and I read them for a reason. A commitment is a commitment. The closest I have ever come to actually giving up on a book was probably Peaces.
I knew going in that Oyeyemi writes what are essentially fairy tales and she draws heavily on traditions of African folk tales as well as Western fairy tales. I knew that her plots do not necessarily exist in a rational sense, but seriously, WTF? I read and I read, attempting to make some kind of sense of the words I was seeing and to understand the writer's purpose. I failed miserably.

We have two characters, Otto and Xavier Shin who are not married but are a committed couple who have recently decided to use the same surname. Xavier's aunt, in celebration of this fact, offers the couple a "non-honeymoon honeymoon" trip on the Lucky Day. The train's owner, Ava Kapoor and her lover, Allegra Yu, are also passengers on the train. A woman who is apparently some kind of legal representative named Laura De Souza is a fifth passenger. And that's it. Oh, except for the two mongooses, Otto and Xavier's pet and Ava and Allegra's pet.

And so the train is off on its journey with these passengers. Where did it start and where is it going? Not clear, at least to me, and maybe it doesn't matter. In the course of the trip, we learn a bit more about the characters and about how they might be connected, and also about someone named Premysl Stojaspal, the son of an artist named Karel Stojaspal who paints canvases in all white, canvases that then reveal different pictures to different people according to their imaginations.
But does this Premysl really exist or is he, too, a picture created by the individuals' imaginations? What does it mean to exist only as a figment of the imagination and someone who can never be really seen? Seriously, what does it mean, and furthermore, who cares?

I think the train is meant to be a metaphor, but I never figured out what it or, indeed, the characters were supposed to represent. Helen Oyeyemi has a vivid imagination and she tells wild and crazy tales. I enjoyed Gingerbread because of its focus on the three main women characters and their life stories; this one, not so much. I'll think twice before adding another of her books to my reading list.