A Comedy of Terrors by Lindsey Davis: A review 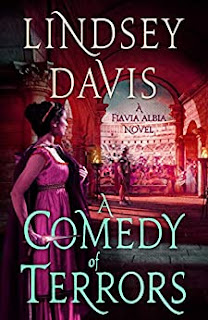 Lines from a Bob Dylan song kept running through my mind as I was reading this. Remember "When I Paint My Masterpiece"? It's the one that starts "Oh, the streets of Rome are filled with rubble..." and it goes on to mention several famous sites in Rome. The streets of 89 C.E. Rome may not have been filled with rubble exactly, but they often seem to have been strewn with quite a lot of the less salubrious effluvium of city life. In other words, you had to watch your step. With these kinds of meticulous details, Lindsey Davis paints vivid pictures of ancient Rome in her historic mysteries. The reader can easily imagine herself on those streets.
Several years ago, Davis had a series featuring private detective, or "informer" as she styles the profession, Marcus Didius Falco. The first in the series came out in 1989 and the twentieth and last book was published in 2009. I read and loved them all. Falco was and is a great character, tough and full of sardonic humor but with a heart of gold for the underprivileged. But then his father died and left him the family auction business and Falco hung up his gumshoes, so to speak, and became a businessman. But he and his wife Helena had an adopted Briton daughter called Flavia Albia who had learned well at her father's knee. Independent-minded and seeking to be self-sufficient and with her parents' blessing, she set herself up as a private informer. Thus began a new series that has now grown to nine books. I read the first one when it came out in 2013, then I moved on to other things and I never got around to the later books. But when I saw that the latest one had been published, I decided it was time to visit ancient Rome once again. It's nice to learn that Lindsey Davis hasn't lost her touch.
Flavia Albia is now pushing thirty and is recently remarried (after widowhood) to one of Rome's aediles (magistrates) and they are foster parents to the aedile's two young nephews whose mother has died and whose father is irresponsible. Albia and husband Tiberius preside over a chaotic but benevolent household of various family members, servants, and hangers-on. We meet them all during December Saturnalia celebrations when things are possibly even more chaotic than usual.
Albia's work is in a slow period but she is determined to continue with it despite her new responsibilities as a parent. When she is approached by a woman who claims to want to leave her abusive husband and disappear into a new life, she takes the case and agrees to help her. It is only later that she learns that the situation may not have been quite what the woman had described.
Meantime, Tiberius is conducting his own investigation with the help of the vigiles (police/firemen in ancient Rome). It is an investigation of fraud in the nut-selling business, an important enterprise, especially during Saturnalia. One nut leads to another and soon the investigation reveals even more rampant fraud, bribery, intimidation, and murder. Moreover, the investigation overlaps with Albia's case, and the two join forces to combat evil and a threat to their family. They are on a tight schedule because Tiberius' term in office and his authority end with the new year so they need to wrap it all up swiftly.
This story includes some fairly disgusting and grisly goings-on at times as one might expect in ancient Rome but Davis tells it all with a light touch. Albia has evidently learned her humor from her father so she has a way of delivering the narrative (and we see everything through her eyes) with frequent sardonic bon mots that can't fail to bring a smile. Davis even brings on Falco and Helena in guest appearances for nostalgia's sake. Best of all perhaps, Lindsey Davis continues to excel at her descriptions of life in that ancient city. Walk through those streets and watch out for the rubble and that less salubrious effluvium and you'll find that the city teems with all the delight and delirium of life lived large. I'm glad I decided to check in on this series again.
My rating: 4 of 5 stars
books Lindsey Davis reading reviews