Once There Were Wolves by Charlotte McConaghy: A review 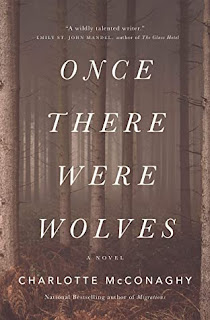 Once there were wolves in Scotland but no more.  The official record shows that the last one was killed in 1680, although there are some reports that a few remained up until the 19th century. In her new novel though, Charlotte McConaghy imagines a project of reintroducing wolves in Scotland and the kinds of reactions and problems that might result.
Heading up the fictional Cairngorms Wolf Project is Inti Flynn who describes herself as a "bad-tempered Australian who finds it hard to hide contempt and sucks at public speaking." Maybe not the ideal personality for a project dependent upon establishing good public relations. Inti had previously worked with wolves in Alaska where she had assembled her team of wolf biologists who will help her with Cairngorms. The biologists travel to Scotland along with the fourteen Alaskan gray wolves they have trapped to be released in Scotland.
Wolves are apex predators and as such the biologists hope their release will help to control the deer population and restore a balance to the ecosystem of the Highlands. If the overgrazing deer are thinned out then the woodlands will be allowed to spread which in turn will boost carbon capture and biodiversity. As it happens, the human population of the area where the wolves will be released is composed mostly of sheep farmers who are not sanguine about the release of these apex predators that they view as a threat to their sheep. One of Inti's challenges is to win these people over. It's a challenge that she is very bad at meeting because of her temper and her impatience with people in general.
As we learn more about Inti, we learn that she herself is a very damaged person, having endured traumas from her family history. Inti is an identical twin and her sister who now shares a cottage with her has been physically and psychologically damaged by an abusive husband to the point where she has stopped speaking and often seems unaware of what is happening. Inti is understandably protective of her sister.
And then there is this weird neurological condition that Inti has; it's something called mirror-touch synesthesia which means that she feels the sensory experiences of other humans and even some animals. If she sees them, she feels them. That can be a serious handicap for a biologist working with wolves because she can feel their pain.
In time, the biologists release the wolves, all of whom wear transmitters so they can be tracked. All does not go smoothly. One of the wolves is shot by a farmer who is convinced the animal is threatening his sheep. Then a man is killed in the forest and it appears he might have been killed by wolves. Inti is frantic to protect her wolves from the retribution of the locals. In this, she has a sort of ally in the police chief Duncan MacTavish with whom she is soon having an affair.
There is a lot to process in this plot. I haven't begun to cover all of its points. One gets the feeling that the writer is not entirely in control of it. It sort of meanders all over the place as she attempts to tie up all the loose ends in the story and there were bits that just seemed totally unbelievable and unnecessary to me. What started out as an atmospheric eco-thriller about rewilding goes off the rails a bit and the ending seemed forced and rushed. After loving McConaghy's previous book, Migrations, my expectations for this one were extraordinarily high, and although I did enjoy much of it, it didn't quite deliver the satisfying read I had anticipated.
My rating 4 of 5 stars
books Charlotte McConaghy reading reviews