The Vixen by Francine Prose: A review 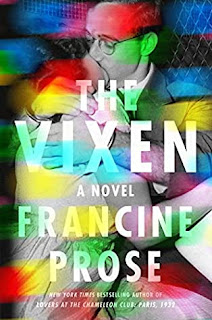 Francine Prose has written a very funny, indeed often hilarious, novel about an execution. Specifically, it is the execution of Julius and Ethel Rosenberg in 1953, after having been found guilty of conspiracy to commit espionage for the Soviet Union. But I suppose it's wrong to say it is "about" the executions. It's really about people's reactions to the executions and how the fact of the event was used by certain people for their own purposes.
The protagonist of the story is one Simon Putnam who was a recent Harvard graduate at the time. He had studied folklore and myths and he was obsessed by a particular Icelandic saga of revenge. He had hoped to continue in graduate school but his application was turned down and in 1953 he was living with his parents in his childhood home on Coney Island. For some unknown reason, given his stellar training in folklore, he was having trouble finding a job.
The Putnam family was Jewish and Simon's mother had known and grown up in the same neighborhood with Ethel Rosenberg. She did not believe that Ethel was guilty of espionage but that she had been duped by her husband and the Soviet agent. She was very distressed as the family watched sitcoms on television on the night of the execution with frequent breaking news interruptions about what was happening. Her husband showed his nervousness by making very bad jokes about the whole thing. Simon was in the middle of it all. His way of coping was to go to the amusement park on Coney Island and ride the roller coaster and other attractions there.
When Simon's mother persuaded her brother-in-law to use his influence to get Simon a job at the publishing house of Landry, Landry, and Bartlett, it seemed like a godsend. What better place for a liberal-educated smart young man who loved words and good sentences? A position editing books seemed just the ticket to get him on the road to success. Soon after his hire, his boss dropped into his cubbyhole office to deliver a book he wanted Simon to edit.
Initially, Simon is proud that he is being given the responsibility for a book that his boss assured him will be a best seller and would help to secure the publishing house's liquidity. Then he started reading the book titled The Vixen, the Patriot and the Fanatic. It was terrible! Even worse than the hilariously awful writing was the subject matter; it was about the Rosenbergs, although in the book they are called Esther and Junius Rosenstein. The only good thing about the book was the sexy cover picture of the gorgeous author reclining on her bed. Simon spends his nights masturbating to that picture while trying to figure out ways to get her to meet with him to discuss "improvements" to her book.
Simon views the book as a betrayal of his mother's memories of Ethel Rosenberg. The writer has turned this rather dumpy middle-class housewife into a femme fatale with "ample, shapely breasts." She describes her as the "notoriously buxom and beautiful Mata Hari who'd almost slithered through the dragnet the F.B.I. dropped around her." She was possessed of an unchecked libido that drove the men around her mad with desire, made them lose all reason. One begins to wonder why a slick operation like Landry, Landry, and Bartlett would want to publish such an unmitigated piece of garbage. And one would be right to wonder.
Some of the more memorable and funny moments of this book are "excerpts" from The Vixen, the Patriot and the Fanatic as Simon struggles to find a way out of his predicament that will allow him to keep his job and his self-respect and also be able to face his mother. After spending about two-thirds of the book setting up this conflict, the latter part of it is all twists and turns leading to a most satisfying conclusion.
Prose writes with a subtle clarity that offers insights that can only make the reader nod her head in agreement. As we read we begin to realize there is more here than at first meets the eye. As things spiral out of control around us, what is it in our DNA or character that determines how we will respond? Is it all just an accident of fate? Could the Rosenbergs//Rosensteins have acted any differently? Could Simon or his parents? Could we? Yes, it is an amusing novel and a page-turner, but it also gives us something to think about.
My rating: 5 of 5 stars
books Francine Prose reading reviews