The Island by Ragnar Jonasson: A review 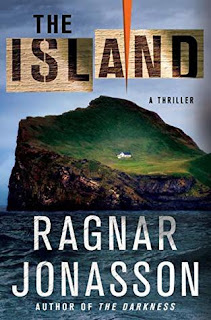 This is the second in Ragnar Jonasson's "Hidden Iceland" series. Uniquely, he chose to write the story in reverse order and so the events of this novel actually take place some fifteen years before those of the first book, The Darkness.
It is 1997 and Inspector Hulda Hermansdottir's mother had recently died. Following her death, Hulda had decided to try to find her American father. All she knew about him was that he was a GI who served in Reykavik after World War II, his first name was Robert and he came from Georgia. She was able to identify two possible candidates and she flew to Savannah to meet one of them. This very nice man told Hulda that her father must have been the other guy and he checked on him for her and discovered that he was dead. Thus ended her search but her interlude in America was an interesting fragment of the overall story. It emphasized just how lonely Hulda's life was. Ten years earlier, her beloved teenage daughter had committed suicide and a couple of years later her husband died. Now her mother is gone and, apparently, her father is, too, so she is alone in the world.
Her cure for her loneliness is to throw herself into her work. Ten years earlier, around the same time as her daughter's death, a young woman named Katia had been murdered on remote, uninhabited Ellidaey Island. Hulda's co-worker at the time, Lydur, had investigated the case and had concluded that her father had abused and killed her. The man was arrested and he committed suicide in custody and so there was never a trial. The case was closed. The notoriety of this investigation had propelled Lydur up the ladder of success and now he is Hulda's boss.
On the tenth anniversary of the young woman's death, her brother and three friends of hers go to the lonely island supposedly to commemorate Katia's death. What could possibly go wrong? Well, soon, one of the friends ends up dead at the bottom of a cliff with marks around the throat that point to another murder. There are only three other people on the island, so the murderer must be one of them. Hulda will investigate. Her investigation becomes seriously inconvenient for her boss when she raises questions about the guilt of Katia's father in the earlier murder. Is it possible both young women were murdered by the same person?
Jonasson really does excel at creating an atmosphere of foreboding. This is helped along by his evocative descriptions of the isolated and yet stunningly beautiful Icelandic landscape. Moreover, his plotting with its hints of possible paranormal effects helps to keep the reader guessing and the personality of Hulda, stubborn, prickly, and perfectionist in her work engages the reader's sympathy. It is a potent and winning combination. I can't wait to go back even further to Hulda's earlier years and so I'm not going to wait; I'm heading straight into the last book in the series, The Mist.
My rating: 4 of 5 stars
books Ragnar Jonasson reading reviews