The Mist by Ragnar Jonasson: A review 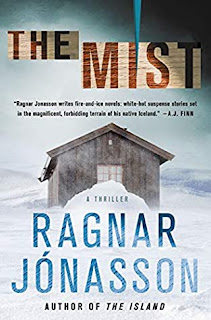 The events of the third book in Ragnar Jonasson's "Hidden Iceland" series take place in the winter of 1987-88, ten years before events in The Island and twenty-five years before The Darkness. In this one, we finally learn about the tragedy that has haunted Inspector Hulda Hermansdottir of the Reykjavik police and has contributed to making her own life a tragedy.
We begin in eastern Iceland, perhaps the most remote and isolated section of a relatively remote and isolated country. Far off the beaten track is a farmhouse belonging to a sheep farmer and his wife, Einar and Erla. Einar's family had owned the land for generations and he loved it there. Erla was a city girl who gave up that life for love of Einar but she has never been truly happy on the farm. Erla spends her time reading books that at least allow her to be an armchair traveler. She has constructed a dream world for herself that allows her to tolerate her lonely life.
Back in Reykjavik, Hulda is undergoing her own family crisis. Her young teenage daughter, Dimma, who had always been a happy, cheerful child is suddenly withdrawn and silent. She stays in her room, barely eats, and locks the door to her room. Hulda is very worried. When she comes home from work every day, she tries to talk to the girl and draw her out, but nothing is working. Her husband, on the other hand, shows an utter lack of concern and constantly assures Hulda that the girl is just going through a teenage phase. The consummate detective is unable to detect what is wrong in her own house. As Christmas approaches, the situation deteriorates further and Hulda is determined to consult a psychologist after the holidays. Before she can do that, her daughter commits suicide. Only after the fact does Hulda understand why her beloved daughter had been so distressed and unhappy. She is devastated, realizing that she had failed Dimma.
Meanwhile, another family's daughter had gone missing. The young woman, who wanted to be a writer, had decided to travel around the country on her own for the experience and to gather material for her writing. She kept in regular contact with her parents. Then the contacts abruptly stopped. Unable to reach her, the parents contacted the police who had been searching for her for weeks without a result.
Back on that isolated farm at Christmas, in the middle of a snowstorm, a man knocks at Einar's and Erla's door. He claims to have been out hunting with friends and got separated from them. Now he's lost and asks for shelter for the night as the storm rages. Erla is immediately suspicious but Einar reassures her that everything will be fine and, of course, they cannot turn the man away in the storm.
Two months later, neighbors grow concerned that they have not seen Einar and Erla for quite a while. When someone finally goes to the farm to investigate, they find two dead bodies, plus all the sheep are dead in the barn, having starved to death. Obviously, this calls for a brilliant detective to figure everything out and, fortunately, Hulda Hermansdottir is back at work after her compassionate leave. She is actually grateful for the distraction of the case as it gets her out of the house and away from her husband with whom her relationship is toxic since their daughter's death. We can be sure she will not rest until she digs out the truth of what has happened.
This is a complicated plot but Jonasson is a master of complicated plots. He takes us back and forth through the various elements he has introduced as he ratchets up the tension and builds an inescapable sense of dread. The plot twists and turns its way through unexpected reveals and unspeakable tragedies as it pulls the reader along to a shocking conclusion. And through it all, Jonasson's elegant writing and the excellent translation by Victoria Cribb make it a pleasure to read.
One last note: The final scene of the novel made me smile just a bit as it foreshadowed an event that was reported in the first book of the series and sort of ties everything together. Clever Ragnar!
My rating: 5 of 5 stars
books Ragnar Jonasson reading reviews