Owls of the Eastern Ice: A Quest to Find and Save the World's Largest Owl by Jonathan C. Slaght: A review 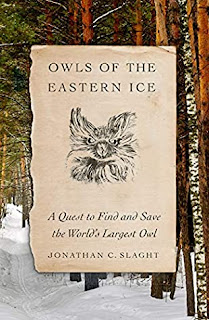 Blakiston's Fish Owl is the largest owl in the world. The females who are bigger than the males of the species can weigh as much as ten pounds and wingspans of more than six feet have been measured. This giant among owls lives in remote forests along the Russia/Japan/Korea border, a habitat that it shares with the Amur (aka Siberian) tiger. Both of the creatures are endangered and this area is among their last refuges.

Wildlife biologist Jonathan Slaght first visited this Primorye region of eastern Russia as a member of the Peace Corps when he was nineteen years old. He was overpowered by the incredible terrain of this remarkable habitat that was home to an amazing diversity of animals. Later, when as a graduate student the time came for him to choose a subject for research and dissertation, he knew what he wanted to do. He wanted to study those magnificent fish owls and by uncovering the secrets of their lives to be able to get governments to protect them. In order to secure the conservation of this one species, it would be necessary to protect the habitat and that could in turn rescue many species.

In 2005, Slaght teamed up with a Russian crew to conduct research in the area and ultimately to make a conservation plan for the owls. The best time to study these owls is in the winter during their breeding season but that is a brutal time in their part of the world. Slaght and his team were forced to navigate frozen rivers and their deadly and unpredictable thaws and the winter storms with attendant snow and ice and freezing winds offered little let up. Deep in the woods, the team repeatedly encountered an eccentric array of hermits, recluses, and hunters. Though warned that meeting a person in the woods was not a good thing, for the most part, these experiences proved to be benign and occasionally they even revealed people who were able to and willing to help.

Slaght's book relates in great detail the rigors and repetitive nature of fieldwork in such a hostile environment. The team not infrequently finds itself stranded for weeks by storms, floods, and melting ice, not to mention problems with equipment that breaks and other miscellaneous misfortunes. The men are forced to cohabit in close - sometimes very close - quarters with all the irritations that involves. In between all those adventures and near-death experiences, they spend a lot of time waiting. Waiting for the owls to show themselves. Waiting for them to enter one of the traps. Waiting and hoping they will be able to affix the GPS trackers to monitor the birds' movements. While waiting, Slaght becomes hyper-aware of the landscape and all that is happening in it. He takes note of it all and now he tells us about it in this remarkable book.

His enigmatic quarry seems most un-owl-like as he describes them. They hunt underwater prey and so they have no use for the silent flight of most owls. Their flights on those enormous wingspans can be noisy and often appear awkward, but they have evolved to fill a particular niche and they fill it quite well.

Slaght returned year after year to tag owls and collect their data for his eventual dissertation. During those years, he sometimes witnessed heartbreaking tragedies among both the people and the animals of this harsh region. He tells us about that, too, and some of it makes for difficult reading. But he is an effective storyteller and he makes us see why he so loves that region. We begin to appreciate the peace and healing that can be found in this unforgiving forest. And especially we can appreciate the dedicated people who spend their lives trying to preserve it and the wonderful owls that make it their home.