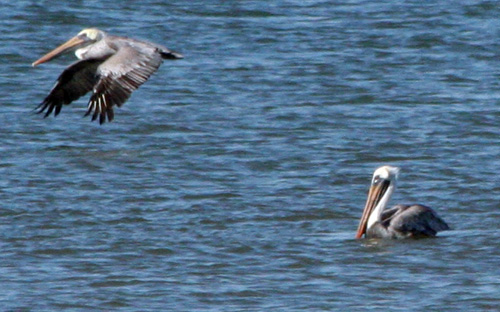 Brown Pelicans on Galveston Bay.
*~*~*~*
I'm sure that you will not be surprised to learn that last month was the hottest month ever recorded on Earth.
*~*~*~*
According to the Intergovernmental Panel on Climate Change report issued this week, humans have heated the planet by 1.1 degrees Celsius or 2 degrees Fahrenheit since the 19th century mostly by burning coal, oil, and gas for energy. At this point, we cannot stop global warming from intensifying over the next thirty years and we have a very short window for preventing the most harrowing future.
*~*~*~*
Another study released this week revealed heat-related health problems experienced by tens of millions of Americans last year. These, too, are expected to intensify in the future.
*~*~*~*
Legislation to restore and strengthen the Migratory Bird Treaty Act has been introduced in the U.S. House of Representatives.
*~*~*~*
The February freeze in Texas brought home to this science writer in Austin just what losing the coral reefs might be like.
*~*~*~*
Birds love hair for their nests and they will take it anywhere they can get it - including from living animals.
*~*~*~*
The first living "murder hornet" of 2021 has been spotted in Washington state. Another hornet was found earlier this year but it was already dead.
*~*~*~*
Wastewater exposes animals that swim there and plants that live there to various chemical compounds that are utilized by humans. What effect does exposure to these chemicals have on the plants and animals? That is a question currently being studied by scientists.
*~*~*~*
Mice, voles, shrews, rats, and dormice all produce high-pitched sounds to attract partners, ward off potential threats, communicate within families, and even find their way around using echo orientation. Scientists in England are using bat detectors to listen to and study these sounds.
*~*~*~*
The American Bird Conservancy's "Bird of the Week" is the elusive White-eyed Vireo, a bird of dense, scrubby habitats that is likely more often heard than seen.
*~*~*~*
Here are five things that you need to know about the IPCC report on climate from this week.
*~*~*~*
A report found that big oil companies spent $10 million on Facebook ads last year and what exactly were they selling with that? Here's a clue: The ads peaked whenever politicians seemed poised to act on the climate.
*~*~*~*
It turns out that the tusks of wooly mammoths are a bit like road maps that carry a record of where the animal has roamed during its life. The tusks of a mammoth from some 17,000 years ago that scientists named Kik for their study showed that he had lived for twenty-eight years which would have been middle-age for a mammoth and that he wandered far and wide across Alaska during that period.
*~*~*~*
A high temperature of 48.8 degrees Centigrade or 119.85 Fahrenheit was recorded in Sicily during the recent heatwave there, making it the highest temperature ever recorded in European history.
*~*~*~*
Here is more on the social life of giraffes. Scientists are finding that the structures of their societies are just as complex as those of chimpanzees and elephants.
*~*~*~*
How do you distinguish one large all-black bird from another kind of large all-black bird? Here are some clues for telling crows from ravens.
*~*~*~*
A botanist and artist is a proselytizer for the marvels of plant life and for the urgency of saving it.
*~*~*~*
A second western Canadian town, Monte Lake in British Columbia, has been destroyed by an "exceedingly aggressive" wildfire. This is after the village of Lytton was destroyed last month.
*~*~*~*
After critical stories in the news media about the surveillance of pipeline opponents in Minnesota, law enforcement there has blocked the release of public records about the surveillance.
*~*~*~*
The two biggest reservoirs on the Colorado River, Lakes Powell and Mead, have fallen to one-third of their capacity, causing the dwindling flow of water to threaten everything from crop production to electricity generation in the area.
*~*~*~*
A bill has been introduced in the House of Representatives to reauthorize the nation's primary fisheries law and to strengthen it by better accounting for climate change, protecting coastal ecosystems, and factoring in the importance of forage fish as food for seabirds.