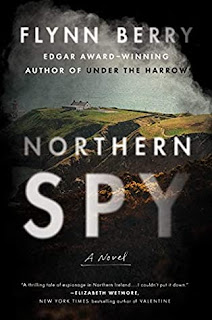 Northern Ireland. It has been years since the Good Friday Agreement was signed, ostensibly putting an end to the sectarian violence of the Troubles, but those who live there know that the tensions continue to simmer. The Irish Republican Army is still active and unlikely to surrender anytime soon.
A young woman named Tessa lives in an isolated village there with her baby son. She is recently divorced from the boy's father but maintains an amicable relationship with him. She works at the BBC News Belfast bureau as a producer and goes through the daily motions of her quiet life, taking care of her son and spending time with her mother and sister. Then one day all of that changes. While working on a news story, Tessa views a video of an IRA robbery. She is shocked to see that one of the robbers is her sister, Marian. Marian has always seemed apolitical and she is an emergency health care worker, seemingly a most unlikely recruit for the IRA. Tessa is even more shocked when her sister contacts her and admits that she has been a member of the IRA for seven years. She was persuaded to become a member by their stated opposition to economic inequality. But more recently, she has become a double agent, passing along information to MI5 in an effort to jump-start peace talks. And now she finds that she herself may be in trouble with the IRA because a bomb that she had created failed to explode. They have become suspicious of her and are keeping her under close surveillance. She has been unable to contact her MI5 handler. The handler makes contact with Tessa and a plan is hatched whereby Tessa can pass along information for her sister. She joins the IRA crew and becomes ever more heavily involved in their dangerous activities.
Meantime, Tessa's life continues to be outwardly quiet as she goes through her daily routines. She comes to the realization that to save her sister and protect her son and make Northern Ireland safe for his future, it is worth putting herself in danger. She is torn by her loyalty to her sister and her fear for her son's future. The writer effectively conveys these conflicting emotions by her use of short chapters that make the narrative flow and move along swiftly. It also conveys the difficulty of Tessa's personal choices and the consequences of those choices for Tessa and her family.
I had not read any of Flynn Berry's work before but I was impressed with the quality of her lyrical writing here. She has created a spine-tingling thriller that is taut and succinct and yet communicates the fraught circumstances that exist in Northern Ireland as it stumbles its way toward what is hoped will be a more peaceful future. Her descriptions of the setting give the reader of sense of being there. In Tessa, she has given us an ordinary woman who is pulled into an extraordinary situation by her love for her sister. The overwhelming sense that one has of her is that she is a compassionate person trying to live a humane life in very difficult circumstances. Her story is a poignant exploration of the question of what one would be willing to sacrifice for peace. In the end, she finds her answer.
Overall, I liked this book very much and I really liked Tessa. My only quibble is that the ending seemed a little contrived, but that is a very small quibble indeed.
My rating: 4 of 5 stars
books Flynn Berry reading reviews