The Secret Lives of Church Ladies by Deesha Philyaw: A review 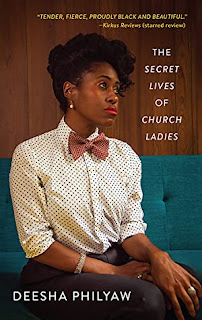 This book was an unadulterated joy for me to read. Short stories are not generally a favorite genre of mine but I'm glad I was able to overcome my prejudice and just read for enjoyment.

Deesha Philyaw's collection consists of nine short stories. The only things they have in common are that they are all about Black women and the women's lives are connected in some way, however tangentially, to the church. The church, of course, has long been a central touchstone of Black culture in America and its influence permeates the lives of people, even those who are not regular churchgoers. All of the women in these stories want more from life than the church can offer. The roles they are meant to play in the family and community as women have been defined by the church and instilled in them by the churchgoing maternal figures in their lives, but those roles do not take into account the individual woman's body and sexuality and her goals for her life.

In the first story, for example, entitled "Eula," the protagonist Caroletta is in love with her best friend Eula. She knows that Eula may never reciprocate, that she holds on to a dream of being "normal" and having a husband and children even as the two of them make love. Eula entertains the fantasy that Caroletta has the same dream and Caroletta allows her that fantasy. Caroletta appeases herself with the bit of Eula's life that she allows her and she finds her happiness in that.

In "Instructions for Married Christian Husbands," a prostitute lays out her terms for engaging in sex with her customers. She will not waste time on a man who is not willing to follow her rules of engagement. She retains her autonomy and the upper hand.

In "Dear Sister," the father of several sisters has died. He was a mostly absent father and did not maintain close relations with any of the women. After his death, they have heard that there is another sister by a woman they did not know about and the group of four women gathers around as one of them sets out to write a letter to the unknown sister, explaining their father and reporting his death. She lays it all out for her and does not ask or expect anything in return. She simply wants her to know the truth, to know that she has sisters and a grandmother who are willing to be family for her.

In "Jael," a great-grandmother who has already lost her daughter and her granddaughter to drugs and domestic violence, is raising a teenage great-granddaughter. While cleaning her room, she discovers Jael's diary and is appalled by what she reads there. It gets "worser and worser" the more she reads, but in the end, she allows Jael her privacy and her freedom to make her own decisions and her own mistakes.

Then there is "Peach Cobbler" which features a philandering Pastor Neely who is engaged in an affair with at least one, maybe more, of his parishioners. He really loves the woman's peach cobbler and she makes him one for each of his weekly visits to her house. The image of him standing at the kitchen table and eating the cobbler from the pan reveals his animal nature rather disgustingly. When the woman's daughter, Olivia, makes her own peach cobbler based on watching her mother and delivers it to the pastor's wife and son, it is an act of defiance on her part and a way of pursuing her own power.

The other stories in the collection are the intriguingly titled "How to Make Love to a Physicist," "Snowfall," "Not Daniel," and the especially poignant "When Eddie Levert Comes" which features an elderly mother suffering from Alzheimer's and the daughter who she no longer recognizes and never gave much tenderness who is now responsible for her care. It is nearly impossible for me to choose a favorite from these nine, but if pressed hard I might choose "Dear Sister" just for its sardonic humor and the sisterly relationships that are described so well.

This was Philyaw's debut collection of short stories and it was an award winner. Its acclaim was well earned in my view. It is very well-written and features characters we can identify and empathize with. The collection opens with a quote from Ansel Elkins' poem, "Autobiography of Eve": "Let it be known: I did not fall from grace. I leapt to freedom." The women in these stories are all in their various ways leaping toward freedom.