Migrations by Charlotte McConaghy: A review 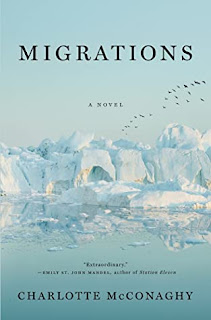 “The only true threat to birds that has ever existed is us.”

Charlotte McConaghy's Migrations takes place at some time in the not-too-distant future when the sixth extinction has almost run its course. Most of Earth's animals are gone. The last known wild wolf has died. All the big cats are gone. The monkeys, the elephants - all gone. There are, however, a few survivors. Some birds, the ultimate survivors (just ask the dinosaurs), still fly. In the ocean, some fish still swim. And thereby hangs this tale.

Among the surviving birds is what may be the last colony of Arctic Terns. These amazing birds are the Olympic champions of long-distance flight. Twelve inches long, with a wingspan of 31 inches, and weighing less than four ounces, these birds make the longest migration in all of the animal kingdom. Each year, they fly from the Arctic to Antarctica and then back again.

Franny Stone, a young Irish-Australian woman with a mysteriously damaged background, is fascinated by the Arctic Terns. The origin of her fascination is slowly revealed to be from her biologist husband who studied them. But it isn't clear at first just why she is so obsessed with them. She travels to Greenland where she will electronically tag some of those (possibly last) Arctic Terns. Then she hopes to find passage on a boat that will allow her to follow the birds on what may be their final migration.

In her search, she encounters the captain of a fishing boat, a purse seine herring boat, called the Saghani. The captain, Ennis Malone, is enigmatic and mostly silent and seldom leaves the bridge of his boat. But Franny somehow manages to convince him that allowing her to track the birds will lead to fish because the birds must find fish to sustain them on their long journey. He wants to believe that perhaps following the birds will lead them to a big catch of herring. And so he agrees to take her on board.

Once on board, Franny must earn her keep. She swabs the decks. She learns to tie knots, all kinds of knots, and repeats and repeats the practice until blisters form and pop and her hands bleed. And all this time the boat is pitched about by North Atlantic storms. As she becomes part of the crew and establishes a kind of camaraderie with them, we also begin to learn about her traumatic and troubled past. We learn that she's spent some time in prison and there is a mystery about her husband: Are they merely estranged or is he dead? And did he die by her hand? Her story as it is revealed to us is replete with gaps and omissions.

As her life on board settles into a routine, there comes a time when the Arctic Terns they are tracking land on the boat to rest on their journey. The crew is intrigued by their presence and full of questions for Franny.

"...it's not really answers they want, it's simply remembering what it feels like to love creatures that aren't human. A nameless sadness, the fading away of birds. The fading away of the animals. How lonely it will be here, when it's just us."

The passage is never easy. The boat and its crew run into all kinds of problems from legal to climate-related and the crew finds itself in the position of shielding Franny from the gaze of the police. Through it all Captain Ennis Malone is singularly focused on pursuing his "big catch," possibly his last. I think it is not a coincidence that he reminds one so strongly of Captain Ahab, but Malone's white whale is a gigantic school of herring. Just as in Moby Dick, the subtext is humankind against Nature.

Not to reveal any spoilers of the plot but in the end, only Franny and Malone make it to Antarctica, not on the Saghani but on a stolen yacht called the Sterna paradisaea, the Latin name of the Arctic Tern.

"My life has been a migration without a destination, and that in itself is senseless. I leave for no reason, just to be moving, and it breaks my heart a thousand times, a million. It's a relief to at last have a purpose. I wonder what it will feel like to stop."

Migrations is in many ways an amazing novel. It is McConaghy's first voyage into the sea of literary eco-fiction. Her previous writing has mostly been of the young-adult fiction genre. Her descriptions of the near dystopian landscape with its animal populations going extinct are heart-wrenching for anyone who cares about our planet. As Franny's husband once despairingly commented: "What happens when the last of the terns die? Nothing will ever be as brave again."

It's a sentiment that lingers long after finishing this extraordinary book.