A Children's Bible by Lydia Millet: A review 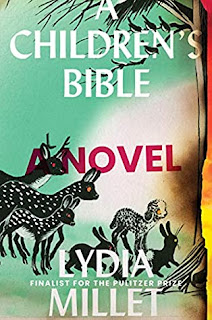 Lydia Millet's book tells the story of twelve children - teenagers and some of their younger siblings - who are taken to a sprawling lakeside mansion for a summer vacation. The kids don't necessarily want to be there but nobody asked them, of course. The parents are a debauched lot who spend their time in a stupor of liquor, drugs, and sex. The kids are both neglected by their self-centered parents and suffocated by the parents' insistence on their being in this place all summer. They organize their lives and their time to be away from the parents as much as possible.

Then an apocalyptic storm hits and everything changes.

The children have been thoroughly disgusted by their parents' behavior and now they decide that their best option is to run away. One of their number knows of a ten-bedroom house owned by his family that is apparently empty and where they might be able to find shelter from the apocalyptic chaos and so they head for it. They don't make it, however, instead ending up at a farm somewhere in Pennsylvania that is run by a caretaker and owned by an absentee rich woman.

The ringleaders of the group include a teenager named Evie and it is through her that we see events. Evie has a younger brother, nine-year-old Jack, of whom she is super protective. Jack is a sensitive and precocious child, a voracious reader, and at some point, one of the parents had given him a book called A Children's Bible.

At their new location in Pennsylvania, the children learn that the storm that battered them was not merely local but has caused death and destruction all up and down the eastern part of the country. Things are falling apart in the aftermath and more and more of the events in Jack's bible find their counterparts in that which the group is experiencing; this includes everything from a birth in a stable to a plague and even a crucifixion. But these events are just depicted; there is no attempt to fit them together in some kind of grand metaphor.

Lydia Millet has a master's degree in environmental policy and a day job working for the nonprofit Center for Biological Diversity in Tucson. A Children's Bible is her thirteenth book of adult fiction. It seems to suggest an intelligent, all-encompassing theory of everything. Everything is related and everything that we do has an effect on the world we live in. For Jack, his Bible is just an old book full of puzzles for him to try and figure out and make sense of and it is not at all surprising that he would see analogies from the lost world described there to the rapidly disintegrating society in which he lives. Millet seems to be striving for the same kind of effect with her "bible." She reports on what is happening so that whoever comes after us might be able to solve the puzzle of what has happened and perhaps how we went so wrong. There is a lot to think about here, but it is all delivered without preachiness and simply as a scientist might deliver a report. But that is in no way to denigrate the literary value of Millet's accomplishment which has landed her on many of the "Best Books of the Year" lists.