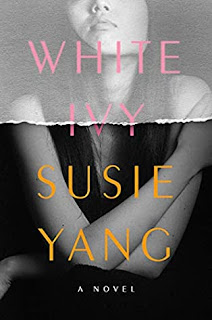 Ivy Lin was born in China and while she was still a baby, her parents emigrated to the United States, leaving her with her grandmother, Meifeng, to be raised. By the time she was five years old, her parents had become established enough to send for her. She joins her parents and a baby brother, Austin, in Massachusetts. A few years later Meifeng also joins them and starts teaching her granddaughter how to shoplift and to take things without paying for them and without suffering the consequences of her actions. Ivy becomes quite proficient in her newly learned skills.
In school, she develops a crush on a golden boy named Gideon. She follows him around, even though he never seems to notice her. Eventually, he does notice her enough to invite her to his birthday party. She attempts to shoplift a camera to give him as a present, but another boy, Roux, a neighbor with whom she had been romantically involved works at the store and sees what she is doing. He pays for the camera so that she can give it to her crush.
Ivy lied to her parents, saying that she was going to spend the night with a girlfriend, in order to go to the party, but her lie is discovered and the parents show up in the middle of the party to haul her home. She is humiliated.
Following this, her parents send her back to China to visit her aunt and while she is gone, they move to a new town. When she returns, it is to a new home, a new town, a new school. Her connection, tenuous as it was, with Gideon, as well as her connection with Roux, is broken.
Years pass and her life continues in the same vein. She is a liar and a thief. She becomes an elementary school teacher, not because she likes kids or feels any calling for the profession but simply because she has to do something to get her parents off her back. She lives and teaches in Boston and one day, she accidentally runs into Gideon's socialite sister, Sylvia, and through her is able to once again make a connection to Gideon. They begin dating and when Gideon invites her to the family's seaside cottage to meet his parents, Sylvia is also there, along with her boyfriend Roux who is now quite wealthy.  Small world, isn't it?
These are the basics of the plot. Everything plays out from this point. Ivy again becomes involved with Roux in a sexual relationship that is very satisfying. Gideon, to whom she eventually becomes engaged, is not interested in sex with her, but he has a very close relationship with his friend, Tom. Ivy is utterly clueless.
This is Susie Yang's debut novel and it is billed as an immigrant coming-of-age story. In fact, it doesn't seem that her immigrant status actually plays much of a role in Ivy's life. She is a thoroughly unlikable character, a social climber whose only goal for her life is to marry into a blue blood family in society. She shows no redeeming values at all. She is disloyal, petty, an inveterate liar, and continues to branch out in her thievery. She will do anything - literally - to rise socially and achieve the place in life that she believes is her due. She is a self-destructive narcissist.
Writers often challenge their readers by presenting them with unlikable main characters, particularly women, who can be layered and complex in their makeup and for whom one can feel some empathy even though they are flawed and even dangerous. That's not Ivy Lin. She's a bad one and even though I kept hoping for her redemption, it just wasn't going to happen. I found the plotting interesting enough to keep reading but, in the end, I found it quite unsatisfying.
My rating: 3 of 5 stars
books reading reviews Susie Yang