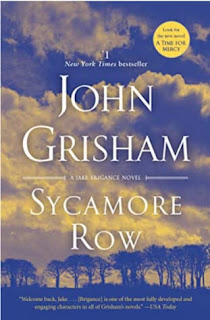 I had heard a lot of good comments about John Grisham's latest book, his third featuring attorney Jake Brigance, and I decided that I would like to read it. But first, I thought I should probably read Sycamore Row, the second in the series. The events of this novel take place in 1988, three years after the trial that made Jake famous as depicted in A Time to Kill. I never actually read that book but I saw the excellent movie based on the book so I was very familiar with the story.

Jake had lost just about everything except his wife and daughter as a result of the earlier trial, but he had hoped that the notoriety that it brought might help him to build his practice and bring in some more lucrative cases. That has not really happened and so three years later we find him and his family living in a rented house and struggling financially.

In October of that year, something happens that seems as though it might provide Jake with an economic boost.

Seth Hubbard is a wealthy Ford County, Mississippi businessman who is dying painfully of lung cancer. He makes a decision to take control of his life and his death. On October 2, a Saturday, he has his housekeeper/nurse Lettie drive him to his office where he writes a holographic will revoking all previous wills and disinheriting his children and grandchildren. His new will leaves 90% of his estate to Lettie, 5% to a long-lost brother who may be dead, and 5% to his church. He then writes a letter to Jake Brigance appointing him as the attorney for his estate and directing him to defend this current will against all other claims. He then mails the letter and the will to Jake. On Sunday, Hubbard goes to church and interacts with several of his fellow parishioners, then sends word to one of his employees to meet him at a specified time and place near a sycamore tree. When the employee arrives at the place, he finds Hubbard hanging from the sycamore tree, dead. He has committed suicide. He has left notes explaining what he has done and leaving instructions for his funeral.

When Jake receives his mail the next day, he gets the letter from Hubbard and follows his instructions in offering his will for probate. When a law firm from Tupelo offers the previous will which they had prepared for probate, they learn of the new will. Thus the disinherited children learn of it and the fight is on. It continues for many months and is described in intricate detail. There are twists and turns to the story and a surprise at the end that explains Hubbard's willingness to leave all that money to Lettie. But the "surprise" was telegraphed well in advance and I didn't really find it so surprising.

I found the characters in this novel to be flat and not very engaging and the writing, in general, to be plodding and repetitious. For a book billed as a legal thriller, it was not very thrilling at all. I'm no longer sure I want to read that third book in the series.