The Eighth Detective by Alex Pavesi: A review 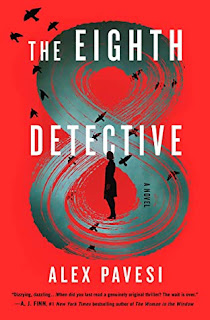 This is a unique entry in the "murder mystery" genre. The idea is that a professor of mathematics named Grant McAllister had long ago devised a theory about the rules that must apply to a murder mystery. For example, there must be a victim; there must be a perpetrator, at least one suspect; and there must be a detective, someone trying to figure out and explain what happened. To illustrate his theory and all the possible permutations of it, he had written seven stories to go along with the theory part and the book had been published thirty years before. Since then McAllister has retired to the seclusion of a remote Mediterranean island.

Then one day, his seclusion is interrupted by an ambitious editor named Julia Hart who had come across his book and who wants to republish it, possibly with more commentary. She wants to discuss the old stories with their author and prepare to edit them for the new book. McAllister, in fact, needs the money, so he agrees to the project.

The form of this book then is that Julia reads each story aloud to McAllister and then they discuss it. What becomes painfully obvious early on in the process is that McAllister doesn't really remember the stories very well and if Julia tweaks them or changes parts of them he doesn't seem to notice. She begins to wonder if he even wrote the stories or the theory at all. By the end of the seventh story, Julia has herself become a detective in search of the truth. She is, one supposes, The Eighth Detective.

This was a bit hard for me to get into at first because I just wasn't really sure what I was reading. Once it became obvious that it was a story, or a series of stories, within a story, I started thinking of the book as a set of Russian Matryoshka dolls, one inside the other in decreasing size until you get to the tiniest doll of all. A kernel of the truth?

It is certainly a clever idea for a novel and the writer makes the most of it and manages to maintain our interest throughout. The ending contains a bit of a surprise, although the foreshadowing was there. Pavesi gets points for coming up with what may be an entirely new take on a well-worn genre.