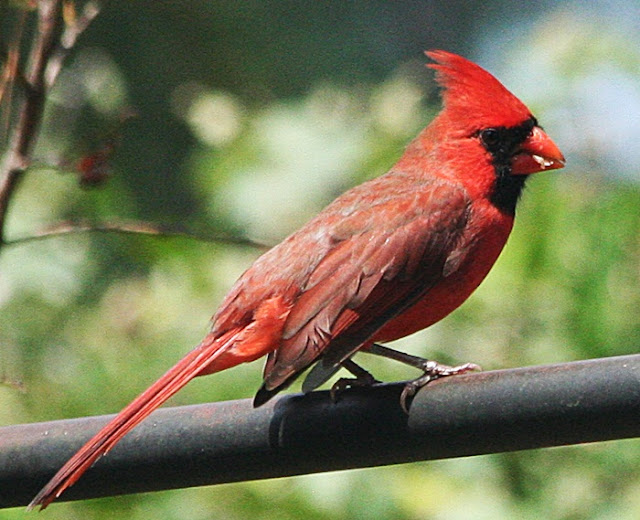 A male Northern Cardinal shells a seed he just picked up from the feeder. Cardinals are without a doubt one of America's favorite backyard birds and, thank goodness, there are still plenty of them around.
*~*~*~*
On its way out the door, the current administration is rushing to do as much damage to the environment as possible. Here are twelve such actions that have been taken since the election.
*~*~*~*
The U.S. Fish and Wildlife Service says it is underfunded and much too busy to take the trouble to add Northern Spotted Owls to the Endangered Species List, even though the birds are eligible for listing.
*~*~*~*
The U.S. FWS uses the same excuse for rejecting a petition to give protection to Monarch butterflies, again even though the butterflies meet the test to need Endangered Species protection. I wonder where all the money appropriated for FWS has gone. It couldn't be that it has been channeled into building someone's vanity wall, could it?
*~*~*~*
Rupert Murdoch and his international "news" (for which read propaganda) organization continue to deny or cast doubt on the reality of human-caused climate change, and in his home country of Australia, they are fed up with it.
*~*~*~*
The Alaska SeaLife Center is the only facility in the state that performs rehab of aquatic animals, thus giving them a second chance at life, but the facility's future may be in doubt.
*~*~*~*
New research shows that fossil fuel power plants in America will reach the end of their expected lives by 2035. This should make it easier to transition to clean power as the new administration promises to do.
*~*~*~*
The listing of the Black Rail as a threatened species will give impetus to conservationists seeking to restore habitat areas for the birds. Loss of habitat is the main reason for the bird's decline.
*~*~*~*
A trail camera positioned along the Bronx River in New York has recorded the image of a bobcat exploring the area. This is heartening evidence of the improving health of the environment.
*~*~*~*
President-elect Biden has announced his selections to head the EPA and the Interior Department. Both have gained widespread praise and the appointment of a Native American woman, Deb Haaland, to head Interior is indeed a historic choice. Both of these people will have their hands full attempting to reverse the damage of the last four years.
*~*~*~* 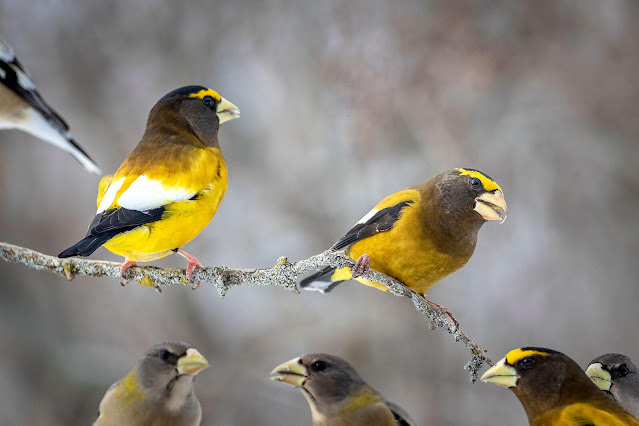 A few of the irruptive Evening Grosbeaks. (Image courtesy of Audubon.)
According to news reports, this fall has seen one of the biggest irruptions of boreal birds in recent memory, but I haven't seen much evidence of it in my yard yet.
*~*~*~*
Wetland areas in Australia have been reduced due to long-term drought conditions. This has resulted in a reduction in the numbers of several waterbird species that rely on such habitat.
*~*~*~*
Researchers at the Royal Botanic Gardens at Kew have announced that 156 new plants and fungi have been discovered and described this year. Among them is "the ugliest orchid in the world."
*~*~*~*
Ivory from elephant tusks that were found on a Portuguese trading ship that sank in 1533 was found to have preserved genetic traces of whole lineages of elephants that have vanished from West Africa.
*~*~*~*
Several previously unexplained power outages in Scotland have now been blamed on the large murmurations of European Starlings flying in the area.
*~*~*~* 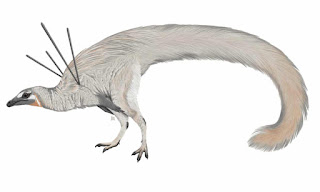 This is an artist's rendering of what surely must be one of the strangest dinosaurs yet discovered. The Ubirajara jubatus lived about 110 million years ago along the shores of an ancient lagoon in what is now northeastern Brazil.
*~*~*~*
Researchers believe they may have discovered a previously unknown species of whale in the waters off Mexico's western coast. If it is confirmed it would definitely be a significant discovery.
*~*~*~*
There is also good news for a well-known species of whale, the bowhead. Researchers have found that the species seems to be making a recovery in spite of the warming of the Arctic waters which are their home.
*~*~*~*
Karen Attiah shares with us her anger and despair at the wanton destruction of her favorite fig tree. Anyone who has ever lost a beloved tree to an inexpert tree trimmer will feel her pain.
*~*~*~*
"This week in birds" will be absent from this space next week as I enjoy holiday celebrations with my family. It will return in two weeks. I hope all of my readers are enjoying a healthy, happy, and safe holiday season.