A Burning by Megha Majumdar: A review 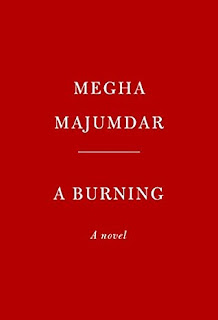 “If the police didn’t help ordinary people like you and me, if the police watched them die, doesn’t that mean that the government is also a terrorist?”

This sentence is at the center of the plot of Megha Majumdar's first novel. It is a Facebook post that is written by Jivan, a young Muslim woman who lives in a Kolkata slum. Jivan had witnessed a horrible, unbearable act. A group of men had set fire to a stalled train and the fire burned alive almost 100 people. Perhaps the most unbearable part of the scene was that the police had looked on while it was done and did nothing to stop it. Jivan shared her outrage in the Facebook post and hoped that she would get a lot of "likes." The unintended consequence of the post was that it brought her to the attention of the police. Appallingly, she herself is arrested for the crime and her post is part of the evidence - in fact, the only evidence - against her.

Majumbar's story is set in modern-day India and it sounds only too plausible based on the news we hear out of India today. She gives us the story from the point of view of three characters: Jivan; her former physical education teacher who is referred to only as PT Sir; and Lovely, a hijra which is a third gender that is recognized in India. The three have relationships of one kind or another and PT Sir and Lovely will be called as witnesses when Jivan comes to trial.

PT Sir comes under the influence of a right-wing political party and his desire to rise in that party begins to affect how he sees things, including how he sees Jivan.

Lovely wants above all else to become a movie star and she focuses on everything that happens through the filter of that ambition and working toward achieving it.

As Jivan languishes in prison and the narration of the story goes back and forth from the perspective of one character to the next, one begins to intuit very early on that Jivan is in a world of trouble and that she cannot expect very much help from her "friends." Each of these characters is well-drawn and we get to understand them and their motivations even if we can't admire or even like them.  Jivan earns our sympathy simply because we can see the action she took in posting on Facebook was born of honest anger and despair but it is clear that she was incredibly naive and had not the slightest inkling that such a post might be brought to the attention of the police. She never really understands what she is up against and even though she has a well-meaning lawyer who tries to help her, we can see from the start that this is not going to end well for her.

This is a very powerfully written novel and one can understand why it has been included on some of the "best of the year" lists. It's hard to believe actually that this is the writer's first novel. I must admit that I found it really hard to get into at first. The structure of it was a bit offputting for me, but I decided to get over myself and just accept the book for what it is. The writing is authoritative, self-assured, and, overall, it gave me a lot to think about.