November 01, 2013
Several days before I got sick in October, I stepped out onto my patio one morning to find this rather elegant and gaudily dressed beetle crawling across. 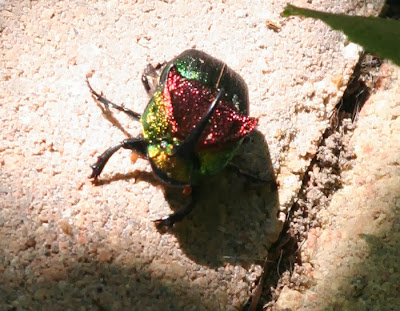 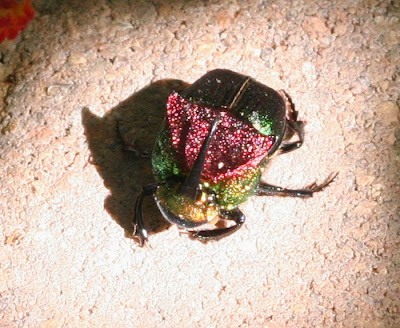 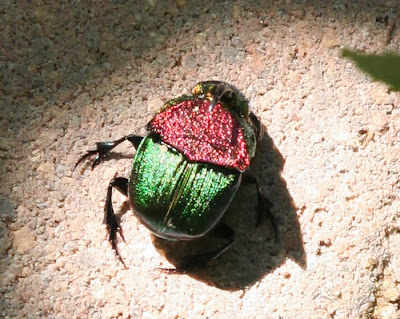 Well, well, I thought, what bug are you? I don't believe we have met before. I snapped his picture and later started researching, trying to learn his name. I knew enough to call him a beetle, but that was able all I knew. But at least that narrowed the field a bit.

I finally found him in an old field guide I owned, A Field Guide to the Insects by Borror and White. Turns out my little visitor is a scarab beetle of the family Scarabaeidae, subfamily Scarabaeinae, or dung beetle! Yes, that elegant-looking little beetle makes his living from dung or carrion.

The little guy, whose proper scientific name is Phanaeus vindex, is also known as the rainbow scarab, which I like much better than dung beetle so I think that's what I'll call it.

The rainbow scarab beetle is resident in the eastern U.S. all the way to the Rocky Mountains, so if you live in that area, you might have encountered one. But I really don't recall ever having seen one before that lucky find on the patio. I was glad to make his acquaintance.
Phanaeus vindex rainbow scarab