The Redeemer by Jo Nesbø, translated by Dan Bartlett: A review 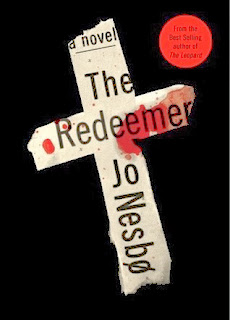 Jo Nesbø is a master of misdirecting attention. He had me thoroughly confused about the true source of the sense of evil that pervades The Redeemer. It was with some surprise that I learned just how wrong I had been.

The book begins with the brutal rape of a 14-year-old girl at a Salvation Army summer camp. It is a crime, like all too many rapes, that is never reported but one that will reverberate throughout the novel.

A dozen or so years later, in modern day Oslo, Inspector Harry Hole's life is more or less back on track after he fell off the wagon and went off the deep end a year ago. His lover Rakel kicked him out after that episode because she didn't want a drunk to be a part of her son Oleg's life. Oleg, however, loves Harry and is determined to keep him in his life and it seems that Harry has worked out a relationship with them.

On the job, things are changing. Harry's friend, protector, and boss at the Oslo PD is leaving. The new administrator may be less forgiving of Harry's...um...unorthodox methods.

It's the Christmas season and Salvation Army bands are serenading on crowded streets. As a crowd of shoppers gathers round one such group, a gunshot cuts through the music and one of the singers falls dead with a single bullet wound through the forehead. The shot came at point-blank range, from someone in the crowd. But nobody saw anything.

The young man killed was supposedly liked by everyone and there is no apparent motive for murder. No weapon is found and there are no suspects.

The victim had a brother, very similar in appearance, who is an officer of some importance with the Salvation Army and Harry develops the theory that the murder was a professional hit gone wrong - that the wrong man was killed. This seems confirmed when another attempt is made on the brother's life.

Harry follows the scant clues he has to the city of Zagreb in the former Yugoslavia and gathers information and makes contacts that will eventually, in a highly circuitous route, lead him to solve the case in his own inimitable, intuitive fashion. And that's when we learn that things are never necessarily exactly as they appear in these books.

Nesbø has a gift for describing the Norwegian landscape, culture, and people. I live in a hot and humid place, but, reading his words, I can feel the cold of Oslo's streets at the darkest time of year creeping into my bones. This sense of place, I find, is always an important part of the story.

Moreover, his description of the organization and culture of the Salvation Army, an organization about which I have only passing, rudimentary knowledge, was important to the story. Apparently, it is an organization that is well-respected by Norwegians and plays a significant role in the care of the homeless on Oslo's streets. That dark underbelly of the city where so many hopeless and homeless junkies reside is also an integral part of the story.

While I was reading this book, I learned that Nesbø has a new entry in the series that was recently published. That makes me happy - more good reading ahead. This has, in fact, become one of my very favorite mystery/thriller series and I look forward to reading more.

Just one more thing. Reading books in translation is always a chancy thing. One has to wonder if one is getting the true flavor of what the author intended, and often the language seems stilted and awkward. I found that to be true, for example, in some of the early books by Henning Mankell that I read. The story was hard to follow because the language did not flow. It got in the way. Nesbø is very fortunate to have Don Bartlett as his translator. There's no awkwardness here. The subtleties and nuances of details are woven seamlessly into the fabric of the story. The art of the translator is often underappreciated, I think. But not by me.