November 26, 2013
I've often written here and elsewhere about the plight of the Monarch butterflies and of the bees. They are iconic insects that can be recognized by most people, even those that are fairly ignorant about other insects, and they are hugely important cogs in the ecosystem.

The migration of the Monarch is a tale which borders on the magical. A fragile insect which makes the long trek all across the continent from Canada to Mexico is something which catches people's imagination as a thing that is really quite marvelous.

The Monarch's migration is particularly important and is cause for celebration in Mexico where the butterflies have traditionally wintered. A story in The New York Times this week ("The Year the Monarch Didn't Appear") emphasized that important cultural link.


On the first of November, when Mexicans celebrate a holiday called the Day of the Dead, some also celebrate the millions of monarch butterflies that, without fail, fly to the mountainous fir forests of central Mexico on that day. They are believed to be souls of the dead, returned.

The story in the Times goes on to report how that return on November 1 did not happen this year. The Monarchs did not return then. It was only a week later that they began to straggle in in record-low numbers.

Last year saw the lowest ever recorded numbers of the butterflies to winter in the Mexican mountains at about 60 million. So far this year, only about three million have shown up. Some Monarch experts express fears that the spectacular migration of the colorful insects could be about to end. What a loss that would be!

Think of the Passenger Pigeons which in the early part of the 1900s blotted out the sun for days with their mass migrations. And yet, before the century was one quarter gone, humans had completely wiped out the species. Passenger Pigeons were extinct. Could the same thing happen to Monarch butterflies?

There are several factors that are related to the decline in Monarchs, as well as in bees and in insects in general.

Perhaps the number one enemy of the butterflies, bees, and other insects is the profligate use by farmers and gardeners of nicotine-based pesticides called neonicotinoids which kill indiscriminately. But even if those insecticides were no longer used, butterflies and bees would still be in trouble.

A huge problem for insects, as indeed for all animals, is the loss of native vegetation, i.e., the loss of appropriate habitat, across the United States. Typically, all the native plants in an area may be uprooted and destroyed for housing developments, roads, shopping centers, parking lots, etc. The landscaping that replaces them may consist of  imported, invasive species that the local wildlife cannot utilize. Thus it becomes a food desert for those critters.

Another problem is the prevalence of farming with Roundup. This is a herbicide that kills virtually all vegetation except for crops that are genetically modified to survive its application. As a result of its usage, millions of acres of native plants, including milkweed, the plant on which Monarchs are completely dependent for the nourishment and survival of their caterpillars, have been wiped out.

Of course, another big challenge which bees, in particular, face is disease. Viruses and parasites may weaken them to the point that they are not able to overcome the other stressors in their lives - for example, flying farther afield to find food when the supplies closer at hand have been wiped out.

The plight of the butterflies and bees is getting more press and more attention from the public and there are a number of organizations that continue to try to educate us about the need to preserve native vegetation and to plant native plants in our landscapes. Gardeners across the country, for example, are being encouraged to plant more milkweed in their gardens to try to compensate for all the native vegetation that has been lost to the bulldozer or to Roundup.

It is hard, if not impossible, to replace all those millions of acres that have been lost. One is chilled by the thought that in our lifetimes we might have to say goodbye to the Monarch butterfly, as our forbears did a century ago to the Passenger Pigeon.

But meantime, keep planting that butterfly weed. It is better to light one candle, however small, than to curse the darkness or to give in to despair for the fate of the beautiful Monarch. 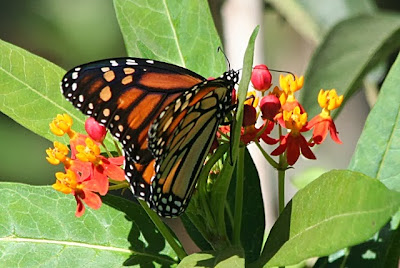