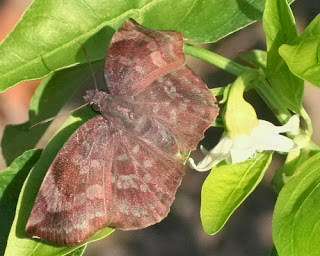 Sickle-winged Skipper butterfly (Achylodes mithridates), aka Bat Skipper, perched on a lemon tree.
This very unusual and fairly large (1 1/2 to 1 7/8 inches) butterfly is easily identifiable in any setting because of the shape of its wings. In addition to their unusual shape, they are striking because they are glossed with an iridescent sheen of lavender and copper and crossed by bands of bluish gray spots. Thus, a butterfly which at first glance seems to be a rather dull brown, on closer examination is actually quite colorful.

This is a butterfly of South and Central America and the West Indies, which ranges into southern Texas where it is a year-round resident. It is rare for them to wander as far north as my backyard just north of Houston, but this one did. When seen in this area, it is generally in the months from August to November. Some have even strayed as far north as Arkansas and Kansas but that is extremely rare.

This skipper is at home in tropical thorn-scrub forest or in city gardens. It perches with its wings spread wide as seen in the photograph above and often seeks shade or shelter on the undersides of leaves. It visits a variety of different flowers for nectar.

The mature caterpillar is bright green with a yellow stripe on each side. Its food plants are lime prickly-ash and citrus plants.

The Sickle-winged Skipper is an infrequent but very welcome visitor to my habitat garden.