The Black Ice by Michael Connelly: A review 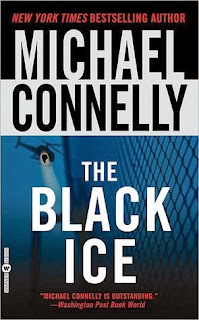 This second in Michael Connelly's popular Harry Bosch series was published twenty years ago in 1993, but it still seems fresh today. Reading it actually reminded me quite a lot of watching Breaking Bad with its aura of violence from Mexican drug cartels and the introduction of a new drug - in this case, something called "black ice."

Harry is still relegated to the Hollywood Division, apparently the armpit of the LAPD, where he continues to investigate homicides in his own inimitable independent fashion. It's a fashion which does not endear him to his superiors.

This particular case starts with him investigating the death of a low level criminal whom no one seems to care much about. He follows a lead to the narcotics division and he meets with an LAPD narcotics officer to try to get more information. Sometime later, a corpse that appears to be that same LAPD narcotics officer is found in a seedy hotel room. His face has been blown away by a shotgun blast and the police quickly mark the death down as a suicide.

It's not Harry's case, but he gets involved anyway and some things about the death don't add up for him. There are some inexplicable details at the crime scene, plus he keeps running into connections with the dead narcotics officer in other cases that he is investigating.

Also, there is the fact that Harry is sent to notify the deceased's widow of his death and he is immediately attracted to her. The attraction seems mutual.

As is his habit, he decides to follow the trail wherever it leads. In this instance, it leads him to Mexico and into a dangerous labyrinth of shifting identities and deadly corruption. How can he determine who can be trusted in this netherworld?

His contact with the Drug Enforcement Agency warns him not to trust anyone in the Mexican police forces or government, and yet his instinct tells him that one of the men that he meets with is trustworthy and he partners with him in his investigations in Mexicali. The narcotics officer who was killed had connections in Mexicali and the suspicion is that he had "broken bad" and was working with the drug dealers.

Meanwhile, another LAPD police officer is murdered, and, again, it is someone that Harry had just met with to get information before he headed to Mexico. Do we see a pattern developing here? Is someone trying to frame Harry?

The LAPD brass insist that Harry come home immediately, but, of course, he doesn't. He continues his investigation, collecting clues, following his instincts all the way to their conclusion.

Michael Connelly is really a very good writer. He plots his stories carefully. He creates characters - especially his main character - that are interesting. The characters engage the reader and make her want to know how things are going to work out - or not - for them. Moreover, he is able to build a sense of excitement that keeps one turning the pages to find out what's going to happen next.

Obviously, I am coming late to this series, but I find that is no barrier to my enjoyment of it. There are many more Harry Bosch books and I look forward to reading them all.