No Lovelier Death by Graham Hurley: A review 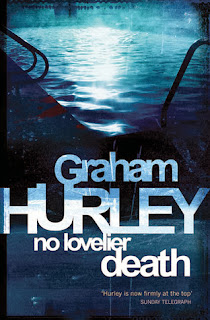 Bazza Mackenzie, Portsmouth's drug king turned (mostly) respectable businessman, lives in an upscale neighborhood of the city next door to a judge, his wife, and teenage daughter. Like any good neighbor, Bazza promises to keep an eye on the judge's house while he and his wife go on a South Sea sailing adventure.

The teenage daughter is left behind on her own and while the parents are away, she decides to throw a party. She announces the party on her Facebook page, and on the designated night for the party, more than 100 kids descend on the house. Things get quickly out of control and the party turns into a riot. The judge's beautiful house is completely trashed.

Bazza and his wife, Marie, had been out that night to their own party. They came home late to find the riot in progress. Bazza wades in to try to bring order and gets a beating for his trouble. Marie calls the police and waits outside for them to arrive. When they do, she turns to go inside by way of their pool, and there she makes another horrifying discovery - two dead bodies.

The bodies turn out to be teenagers, obviously from the party. One of them is the judge's daughter and the other is her boyfriend.

This is a nightmare for DI Joe Faraday and his team - a judge's daughter dead and over 100 suspects in the death and the national media screaming for a quick result.

A quick result seems to be the last thing possible as the police go about the methodical process of sorting through evidence, interviewing suspects and witnesses, and trying to make sense of a completely chaotic scene. They throw all of their considerable resources into finding an answer to the mystery of the deaths, but progress is very slow.

Meanwhile, neighbor Bazza is personally affronted by the mess in his neighborhood and he feels responsible since he had promised to keep an eye on things. He and Marie are initially arrested when the bodies are found by their pool, but it is quickly determined that they were not involved and they are released.

Out of jail, Bazza pursues his own investigation of matters. He calls on his trusty lieutenant, ex DC Paul Winter, to find out what happened and provide him with the names of the guilty.

This, of course, is Winter's forte and he is happy to take up the challenge. He hits the streets in his inimitable fashion, talking to people and, more importantly, listening, and slowly building a picture of what happened on the fateful night. The investigation turns into a bit of a contest between the police and the lone wolf Winter. Wonder who will reach the solution to the crime first?

Graham Hurley has created very interesting characters in Faraday and Winter that it has been fun to follow in all their adventures through the years. Theirs has always been a prickly relationship but one that is founded on a certain respect. That continues, even though Winter is now on the other side of the fence, so to speak.

The dynamic of the relationship has changed, but essentially the two are still after the same thing - a result. It's always fascinating to see how they arrive there, each in his own separate way.