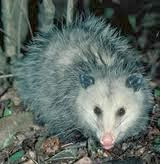 The opossum, or possum, is the only marsupial animal found in the United States and Canada. They are also frequently found in my backyard at night.

Possums are scavengers and are always on the look-out for something that can become their next meal. They are attracted to garbage cans, dumpsters, and other such containers. They also will eat carrion and can sometimes be found near roadkill. They will hunt small animals. In past years, when we had a backyard flock of chickens, the possums were a threat to them. They are omnivorous and will eat just about anything they can get their mouths around. I even sometimes see them under my bird feeders where they pick up nuts and fruits that have fallen from the feeders.

As a member of the marsupial class of animals, female possums give birth to tiny babies, about the size of honeybees. There may be as many as 20 babies in a litter, but, generally fewer than half of them will survive. After birth, they go into their mother's pouch where they continue to develop. As they get bigger, they will go in and out of the pouch and sometimes will ride on their mother's back as she hunts for food. 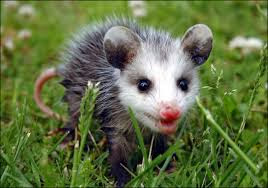 Grown opossums cannot be said to be particularly attractive animals, but the young ones, like this one, are rather cute, I think.

Possums are excellent climbers and much of their time is spent high up in trees. Their climbing is aided by very sharp claws and a long prehensile tail that can be used like an extra limb. Possums nest in holes in trees or they take over dens that were constructed by other animals.

Opossums are an ancient animal and they are survivors. They are highly adaptable, as is shown by their ability to find a niche in which to thrive in suburban or even urban settings. They've been a part of the world of Nature for a very long time. It is likely that they will continue for a long time to come and that they will continue to be a part of my backyard ecosystem.
opossum