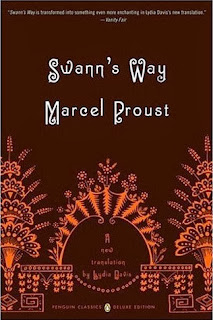 2013 is the centennial anniversary of the publication of the first volume in Marcel Proust's epic, Remembrance of Things Past. In commemoration, many book clubs, literary groups, and fans of the work have organized marathon readings of it. I decided it was time for me to do my own commemoration by reading it. After all, isn't it something that all literate people are supposed to have read?

I had actually attempted to read the book several years ago. I read perhaps thirty pages and was completely daunted. I just couldn't go on with it. But these days, I am made of sterner stuff, plus I have more time on my hands, so I persevered.

And, believe me, reading Proust does require perseverance. His convoluted, complex sentences go on for half a page or more with no relief. If the reader's attention wanders for even a few seconds, she can be irretrievably lost and has to go back to the beginning to pick up the thread of the narrative. I confess this happened to me more than once. The reading was a long, hard slog.

The narrative proceeds on two tracks. The first revolves around a younger version of the narrator who relates his experiences in and memories of the town of Combray. These experiences are triggered by the dipping of a Madeleine into hot tea. In fact, Madeleines play a central role in his memories of times past.

He writes of his fear, as a child, of going to bed at night. He would often wake up in the middle of the night in terror because he was disoriented and couldn't remember where he was. He hated sleeping alone and remembers with great pleasure one night when he was so sad and fearful that his beloved Mamma spent the night in his room.

It was in Combray that he became inclined toward becoming a writer. He is particularly struck by the beauty of the countryside around Combray, and especially loves the blossoms of the hawthorns which line the path to neighbor Charles Swann's house. He sets himself the task of describing everything that he sees to the best of his ability.

The second track of the narrative relates the backstory of a love affair between Charles Swann and a woman named Odette. Swann does not realize that Odette has a terrible reputation. He idealizes her as the embodiment of a beautiful painting by Botticelli. They marry and have a daughter named Gilberte, with whom Marcel later falls in love.

Odette quickly tires of Swann and proves to be a faithless wife, just as her reputation would have suggested. Swann is at first devastated by the betrayal and suffers the pangs of unrequited love. Eventually, he confronts Odette and learns the truth about all her sexual escapades.

Disappointed in love, Swann returns for comfort to the high society of aristocrats and royalty of which he had been a part before he met Odette. Eventually, he comes to see Odette as a very un-Botticelli-like figure and wonders at the fact that he could have ever experienced this great love for someone who wasn't even his "type"!

Marcel Proust's literary talent was nourished by the rich cultural and intellectual atmosphere in which he grew up. He was a noted socialite whose extraordinary intelligence and charm made him a favorite among the Parisian elite. He was a regular in many of the most sought-after salons in Paris. His experience as a member of the most exalted elite in society is reflected in a certain snobbery toward the bourgeoisie and working classes that is evident in his writing.

Reading this work was an exercise in patience. It forces one to slow down and pay strict attention if she does not wish to be lost forever in its maze-like sentences.

When I started reading, I had grandiose plans to push right on with reading all four volumes of this work, without a pause. I'm glad that I finally managed to read Swann's Way, but I definitely need a vacation from Proust before I proceed with the rest of his remembrances. Probably a long vacation.