The White Princess by Philippa Gregory: A review 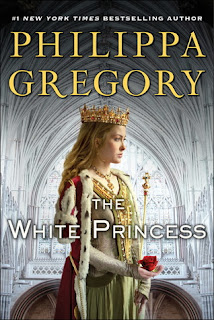 Philippa Gregory's series about the women of the Cousins' War, the 15th century conflict between the Yorks and the Lancasters over who would rule England, continues with this account of the life of Elizabeth of York. Elizabeth was born a princess of the House of York, daughter of Edward IV and Elizabeth Woodville, who we learned about in The White Queen.

As a youngster, Elizabeth is betrothed to Henry Tudor, who will become Henry VII and found the Tudor line. Henry and his uncle Jasper had fled to France when Henry was still a child to avoid being destroyed in the cousins' conflict. Eventually, Henry returns to England with an army and manages to defeat Richard III, the last of the York kings, on the fields of Bosworth.

In Gregory's telling, the princess Elizabeth had been in love with Richard III, her uncle, and, in fact, was his lover. She grieved for his death at Bosworth. Henry, who took the crown that day, chose to honor his betrothal to Elizabeth and to marry her in an effort to unite the country and put the Cousins' War behind them.

Thus, Elizabeth embarks on a loveless marriage, becomes queen of England, and bears five children with Henry. In time, as she learns to understand him better and to empathize with him, she even learns to love him.

Meanwhile, the issue of Elizabeth's brothers, the two York princes who were imprisoned in the Tower of London, continues to haunt the country and to haunt Henry. No one seems to know what happened to them. They disappeared, but their bodies were never found. Richard always claimed that he did not know what happened to them. And now, all these years later, with a Tudor on the throne, there are rumors that one of the brothers survived, that he is mustering an army and planning an invasion. Is he truly a York prince or merely a low-born pretender?

Henry becomes obsessed and fearful of this threat to his rule. He is paranoid, believing that the country will not support him if an invasion comes, and his paranoia makes him cruel.

Elizabeth is torn between her self-interest which lies with Henry and the inheritance of her children and the possibility that her beloved younger brother may actually be alive and the rightful heir to the throne.

This was in many ways a compelling story, although, frankly, the paranoia concerning the possibility of the survival of a York prince which consumes at least half the book becomes a bit tiresome after a while. Also, the constant reminders by our narrator, Elizabeth, about the outstanding beauty and charisma of the whole York family (including herself) as compared to the ordinariness and fearfulness of Henry Tudor become very repetitious and somewhat annoying after a while. I mean, we get it - the Yorks are rock stars and Henry Tudor is just an ordinary man. No need to keep whacking us over the head with it.

Anyway, if the Yorks were so charismatic and greatly beloved by everyone, why did all those people spend so many years trying to overthrow Edward IV? Why did the country spend two decades in constant conflict? But Elizabeth is a York daughter, so I guess we must allow her her prejudices.

This is a worthy addition to the saga of the women of the Cousins' War and it was, for the most part, an enjoyable read. It will be interesting to see if Gregory continues with this series. I wonder what she would make of the Virgin Queen?