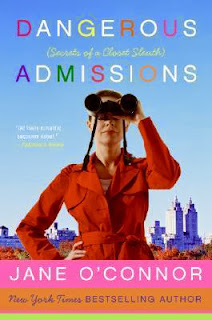 When I read recently that there was a mystery series featuring a copy editor as the sleuth, I was intrigued. Having been married to a copy editor for many years with a chance to observe his powers of deduction up close and personal, it occurred to me that a word sleuth might make a very good detective. So, of course I had to read it, and since I am an obsessive kind of reader who likes to read series books in order, I started with the first one, Dangerous Admissions.

While the concept seemed a good one, the execution was amateurish and, frankly, had little to recommend it. I struggled through it to the bitter end, but only because I like to finish what I start.

The protagonist is a divorced single mother living in New York. She was formerly employed by one of the big publishing houses, until she made an egregious mistake on the reissuing of a Nancy Drew mystery, The Secret of the Old Clock. She failed to notice that the "l" was left out of "clock." Seems an incredibly stupid mistake for an experienced copy editor to make. Maybe she deserved to be fired.

Now she spends her time free lancing and working part time at the posh high school that her teenage son attends. She also has an older daughter who is in college. They all live very privileged lives with no visible means of support.

The director of college admissions at the posh school is an elderly man and one morning he is found dead at his desk at the school. At first it is assumed to be natural causes. He was known to be ill. But an autopsy proves it was actually murder. Poison. Who had a motive and opportunity to kill him?

Not long after, an English teacher at the school, one who had been close to the first murder victim, is shoved off a balcony to her death. The plot thickens. Well, not by much. This is pretty thin gruel.

I didn't like any of these characters. Indeed, the most fortunate characters in the book were the two murder victims who were soon out of it. Everyone in the book seemed like a cardboard cutout or maybe reality show participants. They just never seemed like real people.

The writer throws in a few sex scenes in an apparent attempt to liven things up a bit, but those scenes, too, seem stilted and not very interesting.

I still think the idea of a copy editing detective might work, but it needs a much more interesting copy editor and a writer who is able to construct and execute a plausible plot.