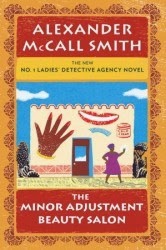 Reading a No. 1 Ladies' Detective Agency novel is like being in the presence of an old and well-known, well-loved friend. It's a warm hug from a someone who knows just when you really need that hug.

These books are classified as mysteries, but they might as easily be called philosophy, because they are filled with Precious Ramotswe's ruminations on life, on what makes people behave as they do, on her beloved Botswana, on Africa.

All of the "mysteries" that she is called on to solve are, at their core, puzzles of human nature and why one person seeks to cause mischief for another. There are no car chases, no gunfights, no bloodshed. There is simply Mma Ramotswe meditating on the personalities of those involved in her current cases and using common sense and her well-honed instinct to sort through all the motives and possibilities to a logical conclusion. The great Sherlock could not do more.

As this book opens, we learn that Mma Ramotswe's associate, the recently married Mma Makutsi, is pregnant and soon to deliver her child. But, out of some superstition that things may go wrong, she does not want to talk about it. She almost refuses to even acknowledge that she is pregnant and she will not discuss her plans after the birth of the child. Will she be coming back to work at the detective agency? Will she need maternity leave and, if so, how much?

One day, a lawyer comes to the agency and wishes to hire Mma Ramotswe to investigate circumstances regarding a will that she is charged with probating. A rich farmer, with no direct descendants, has died and has left most of his estate to a nephew, son of his brother, who often visited the farm as he was growing up. The lawyer suspects that the young man who seeks to claim the inheritance is not really the nephew and that some sort of fraud is being perpetrated by the farmer's sister and this young man. Mma Ramotswe agrees to investigate, but, as often happens in these stories, she finds that things are much more complicated than they appear on the surface.

Meanwhile, Grace Makutsi has her baby, a boy, whom she names for her and Mma Ramotswe's great hero and guide to the art of detecting, Clovis Anderson!

Mma Ramotswe chances to encounter the proprietor of the Minor Adjustment Beauty Salon. She has just moved her business from the shack that it did occupy into shiny new modern quarters and is ready for her grand opening, but all of a sudden, she finds herself the victim of a campaign of intimidation. Someone sends her the feather of a ground hornbill which is supposed to portend some evil coming to the recipient's life.  Then there is a whispering campaign of scurrilous gossip about the salon and its products. It seems as though that triumphant opening of the new salon will never happen. Mma Ramotswe must find out who wishes ill for her client and get to the bottom of the vicious gossip which threatens to ruin her.

And so, Mma Ramotswe travels about the neighborhood in her ancient and beloved little white van to uncover facts, gather impressions, listen to people, and, finally, to weave it all together in a solution to her clients' problems. And as she rambles about we get to share her thoughts and her philosophy, a philosophy that is grounded in the very soil of Botswana. It is a gentle and always life-affirming trek that leaves one refreshed and wanting more.

Indeed, that might be my only complaint about this Alexander McCall Smith series - the books are just too short.