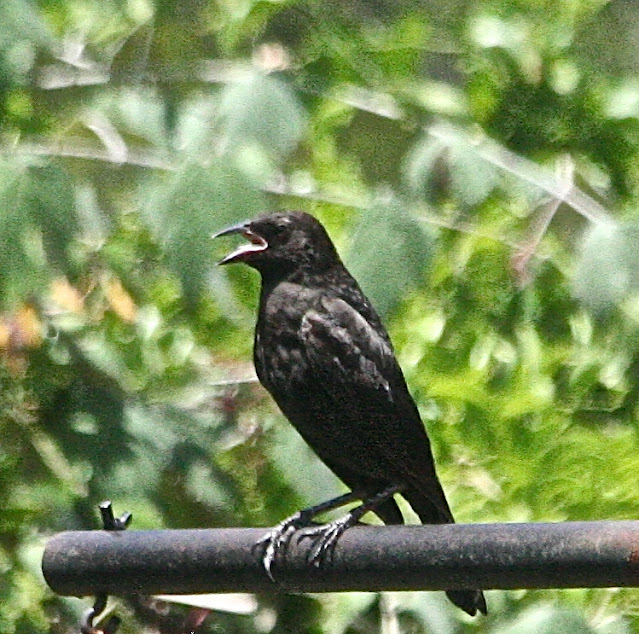 At certain times of the year, Common Grackles are prominent in my yard, but just now I seldom see them here. This one is a rarity who appears to be in the middle of his molt. His beak is open in response to the heat which still lingers in the upper 90 degrees Fahrenheit every day.
*~*~*~*
Pakistan has been suffering from floods that have killed more than 1500 people in that country. A study of the floods has linked them to climate change.
*~*~*~*
Poor nations are asking the United Nations to consider a global tax to pay for human-caused climate-led loss and damage.
*~*~*~*
In this country, California is still suffering a punishing drought and has instituted rules regarding water usage, but it seems that some ranchers are ignoring those rules.
*~*~*~*
Smoke from wildfires in the West has the potential to reverse much of the progress that has been made in recent years toward cleaner air.
*~*~*~*
How many ants would you say there are on this planet? Researchers are estimating 2.5 million for every human on Earth.
*~*~*~*
Lithium is an indispensable ingredient in electric car batteries and it is in short supply, but there is a mine in Quebec that might be able to help.
*~*~*~* 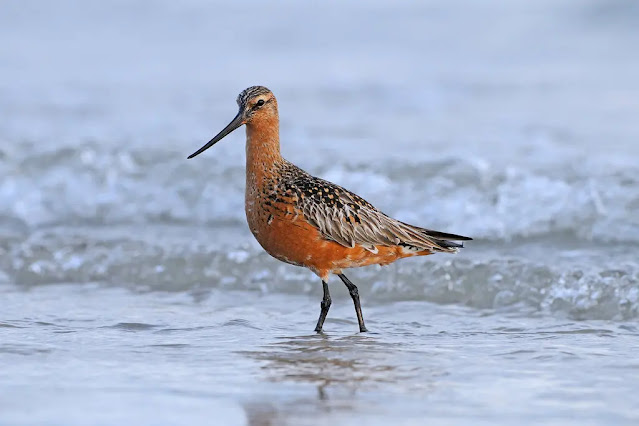 This is the Bar-tailed Godwit, the bird that holds the long-distance flying record. The bird makes the 7,000-mile non-stop flight between Alaska and New Zealand twice a year.
*~*~*~*
Incredibly, regulators are allowing states to spread toxic sewage sludge containing "forever chemicals" even though they have in some instances poisoned water and ruined livelihoods.
*~*~*~*
Researchers found a unique and clever way to study ancient mariners: They built a replica of the ship that had been sailed by those seafarers and sailed it themselves.
*~*~*~*
And speaking of clever, I give you raccoons!
*~*~*~*
The January eruption of the Tonga volcano that sent water vapor into the stratosphere is expected to have a slight, though likely temporary, warming effect on the planet's climate.
*~*~*~*
In yet another negative effect of the warming climate, it may be responsible for helping to spread a brain-eating amoeba that lives in warm fresh water.
*~*~*~*
Miami Beach is suffering from an invasion of non-native iguanas and some want to fight the problem by putting a bounty on the critters to have the public bring them in, dead or alive.
*~*~*~*
Those who have read and enjoyed Shelby Van Pelt's novel Remarkably Bright Creatures will likely appreciate this story about how octopuses hunt.
*~*~*~*
Despite the Colorado River bordering more than 100 miles of land belonging to the Hualapai tribe, the tribe is unable to take water from it.
*~*~*~*
The mayfly is the world's oldest winged insect and it is in trouble. They are among Nature's best environmental sentinels so maybe we should pay attention to what they are telling us.
*~*~*~*
Honeybees have been in trouble for a few years now, but there may be a better and healthier way for beekeepers to house them that could help.
*~*~*~*
Island nations that are in danger of being swamped by rising seas caused by climate change are proposing an initiative that they hope will help.
*~*~*~*
A mystery ancient "alien goldfish" that swam some 330 million years ago was similar to modern sea slugs, according to paleontologists.
*~*~*~*
I love spiders. They are endlessly fascinating critters and here's one that is especially interesting.
*~*~*~*
The Senate finally this week ratified a global climate treaty that would phase down the use of hydroflourocarbons that help to trap heat in the atmosphere.
*~*~*~*
The changing quality of light beginning in September is our clue that autumn is almost here even if the thermometer hasn't yet got the message. Margaret Renkl has an appreciation of this time of year.
weekly roundup