The Lost Gospel by Joe Edd Morris: A review and a special note 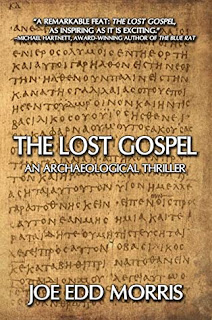 This book, as you might gather from the title, involves something called the "Q gospel," the original lost sayings of Jesus. It is set in modern-day Israel and in the Israel of the years following Jesus' death. It follows the adventures of archaeologist Christopher Jordan and ancient manuscript expert Kathryn Ferguson as they attempt to transport two recently discovered jars that are believed to contain early Christian documents and get them into the custody of experts who know how to handle them.
The jars had been discovered by an American fundamentalist student who was working on a dig in the area and that student, when we meet them, is acting as a driver for Kathryn and Christopher. The ownership of the jars, if their existence were known, would be in dispute between the Israeli and Palestinian antiquity authorities, one more possible escalation of the ongoing percolating resentment in the region. The student/driver is hardly a dispassionate observer of events; rather his fundamentalist religious leanings give him a definite prejudice in the matter.
The second timeline of the story takes us back to 67 A.D. and the life of Jairus who was an early chronicler of the sayings of Jesus in and around Galilee. We also meet Jairus' friend Ezra who guides and advises him. We see how the decision was made to seal these documents recounting Jesus's sayings in jars and to hide them in what, in the 21st century, are disputed territories ruled by Israel.
I liked the way that Morris was able to build his story by alternating between the two timelines. In doing so, he is able to explicate the realpolitik of this fraught region of the world in both ancient and modern times. Moreover, it is easy to see a bright line leading from the turmoil of the Roman era to the powder keg situation that seems to be the region's constant political state of affairs today.
This book combines two of my favorite interests: archaeology and thrillers/mysteries. Overall, it was a very satisfying read.
*~*~*~*
Finally, I would be remiss if I did not mention that this is Banned Books Week in America, a week to shine a bright light on the untiring efforts of some in this country to control what we and our children are able to read. My suggestion is that we as readers familiarize ourselves with the list of books that the fascists are attempting to ban and read them all as if our freedom depended on it. Because it does. Let's make sure we are never reduced to the point of having to seal our books in the equivalent of clay jars and hide them away to keep them safe.