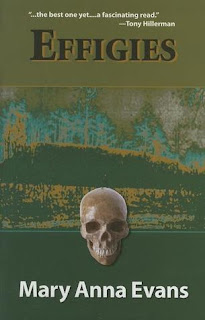 Here's another archaeological mystery from Mary Anna Evans featuring archaeologist Faye Longchamp and her Native American friend and associate Joe Wolf Mantooth. This one takes place in Mississippi in Neshoba County where the great Nanih Waiya mound is located. Choctaw tradition says that this is the mound from which their nation and people sprang.
Faye and her team hope to excavate a nearby mound but the farmer who owns the property refuses to give his permission. Not only does he refuse to allow excavation, but he also takes a bulldozer and attempts to level the mound.
Faye and her associates as well as the local Choctaw people rush to defend the mound and the farmer's neighbors line up with him to press his rights as the property's owner. A standoff ensues and the young sheriff of the county is caught in the middle.
Things then take an even more serious - and deadly - turn. That night the farmer is found murdered. His throat had been sliced by a stone blade. Was his attempt to destroy the mound a motive for his murder and did an archaeologist do it? Or was the reason for his murder totally unrelated to the current controversy over the mound? Instead of a standoff over property rights and the demands of archaeology, the sheriff now has to deal with murder.
Interspersed among the telling of this modern-day story are traditional Choctaw stories as told by a local resident. I found this to be the most interesting part of the tale. It blended well into the more current events and gave some added perspective to them.
I very much like the characters created by Mary Ann Evans, particularly Faye and Joe. Their personalities and relationship are very believable. Moreover, Evans' description of the community and its residents and attitudes toward the mound are all quite realistic. I grew up in such a community with mounds like these and I could relate very easily to the situation as described.
The twists of the plot are sufficient to keep the reader guessing and just when you think you have it all figured out there is another twist and you realize that maybe you don't. This was the third entry in this series. I had read and enjoyed the two earlier books and now I look forward to reading the later ones. It is an interesting and well-written series.
2022 4-star reads 2022 books Mary Anna Evans