The Last White Man by Mohsin Hamid: A review 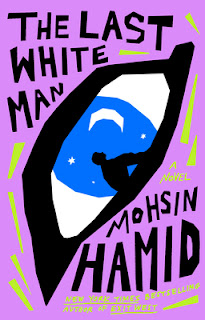 Mohsin Hamid really needs to go to punctuation school. His sentences in this book run on forever, for a full paragraph in some cases. Very long paragraphs. I previously read his book Exit West and I don't remember that being a problem with that one, so I assume that he made a conscious choice to write this book in this manner. I can't speak for other readers but I just found it distracting and annoying.

The story is briefly summarized in the very first sentence: “One morning Anders, a white man, woke up to find he had turned a deep and undeniable brown.” At some time and place that are never fully identified, people start changing color. At least White people start changing color. We see this through the eyes of the protagonist, Anders, a White man who wakes up one morning to discover that his skin is turning dark. He talks to his lover, Oona, about it, and soon learns that this is happening to others as well. This creates an unsettled atmosphere and some people seek to resist the change, but how?

Predictably, when people are faced with something they don't understand with all the shock and fear that result, conspiracy theories abound and this creates even more shock and fear and resultant violence and doomsaying. And yet, life goes on. People are born and they live and die.

We meet Anders' father and Oona's mother. Anders' father is a widower dying of cancer. Oona's mother is a widow in mourning for the loss of her son, Oona's brother. She is easy prey for conspiracy theorists. She just soaks it all in. She was, in fact, one of the most interesting characters in the book for me. She sees herself and the people she comes from as "the only people who could not call themselves a people in this country, and there are not so many of them left." She feels they are on their way to becoming extinct.

Long ago, I read Franz Kafka's The Metamorphosis. I've seen this book compared to that one. In fact, some reviewers have referred to it as a reimagining of that classic. Those comparisons are apt, although in this case, instead of turning into a giant insect, the protagonist and many others remain human but change colors. But in a world where skin color still defines an individual in the minds of many people, perhaps the change from white to dark is not unlike being changed into a bug that is vulnerable to being squashed.

This was an interesting idea for a book and it was generally well-written except for my caveat about the run-on sentences. That was just extremely annoying to me and hindered my enjoyment of the book. Moreover, I know that my sainted English teacher, Mrs. Rubenstein, would not be amused, and I thank you, dear Mrs. Rubenstein, for teaching me better.