The Rising Tide by Ann Cleeves: A review 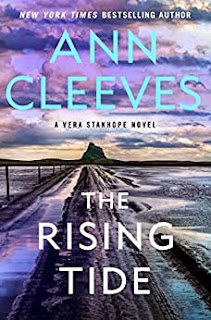 A visit with Vera Stanhope is always one of my favorite reading destinations. I actually had this visit almost two weeks ago and forgot to do a review. Let's see if I can remember what happened.
On beautiful and windswept Holy Island, five friends have been meeting annually for fifty years to commemorate and celebrate their first meeting as teenagers when they were students at Kimmerston Grammar. They had become a strongly bonded group and those bonds have held for all the years since through triumphs and tragedies.
The main tragedy that has forever marked the group was the death of one of their members, Isobel Hall, who, years earlier, had been lost to the rising tide across the causeway leading to the island. The surviving members are Philip Robson, who is a priest; Ken Hampton, an ex-teacher now afflicted with dementia and cared for by his devoted wife, Louise; Annie Laidler who is part owner of an enterprise called Bread and Olives; and Rick Kelsall who is a former celebrity journalist who has been fired after sexual assault complaints by an intern.
The group gathers to drink and tell their stories of the past and they learn that Rick, in spite of his recent troubles, is quite upbeat, telling the others that he has plans that will put him back on top. Those plans are never going to reach fruition though because the next morning he is found dead. At first, it appears to be suicide, but why would a man with plans for the future that he was excited about commit suicide? DI Vera Stanhope doesn't think it is likely and when the post-mortem results are in, she is proved correct. It was murder.
Because of Kelsall's notoriety, the murder gets lots of attention from the media and the pressure is felt by Vera's boss, Superintendent Watkins, who passes along that pressure to Vera and her associates, demanding a quick result. Vera, along with her crack team of DS Joe Ashworth and DC Holly Clarke, goes to work to ferret out the murderer.
Vera's theory is that the solution to the case is to be found in the past of this group of friends. Joe and Holly have their doubts but Vera is the boss and they follow her lead. And, of course, she's right! She's Vera, after all.
Cleeves does her usual excellent job of setting up the story, providing background, and making the island come alive with all its fog and mist and the danger of the rising tide. Moreover, the portrait that she paints of her main character, as well as her two main associates, really makes the reader see them and feel the associates' (sometime) impatience with their boss who to the rest of the world looks like nothing so much as a bag lady. It's a useful disguise for a detective who wants the world to underestimate her. As her opponents will soon learn, that is a very big mistake.
2022 4-star reads 2022 books Ann Cleeves