To Kill a Troubadour by Martin Walker: A review 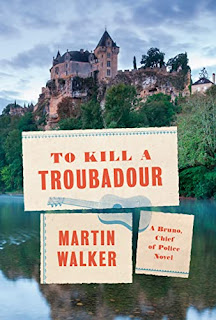 It's time for another visit to the Dordogne to see what's going on with Chief of Police Bruno, aka Benoît Courrèges, and all his friends. And as usual, we find Bruno facing a number of challenges.
Bruno has long been a fan of the folk music group Les Troubadours but all of a sudden the group becomes controversial when their new song, "Song for Catalonia," is banned by the Spanish government. Of course, being banned is just the boost the song needs to make it truly a phenomenon.
The song is songwriter Joel Martin's expression of sympathy for the Catalan bid for independence from Spain. Martin is also known as a local enthusiast for the old Occitan language of the Périgord region and for medieval troubadours and his song is a verbalization of that sympathy. But that, of course, is not a popular sentiment among the more extreme Spanish nationalists.
Amid all the brouhaha about the song, a stolen car is found on a Périgord back road, and in it is a distinctive bullet for a state-of-the-art sniper's rifle that can be used to kill from three kilometers away. The police have reason to suspect that Joel Martin may be the intended target.
Meanwhile, Bruno's good friend Florence is dismayed to learn that her abusive ex-husband is about to be paroled from prison and she is concerned that he will want a relationship with his children and may even try to take them from her. She is considering her options, including a possible move to Canada. Bruno explores ways to keep the ex-husband at arm's length and Florence and the children safe.
Of course, no problem no matter how serious can long keep Bruno and his friends from gathering for a gourmet meal featuring the products of local farms, and once again we get mouth-watering descriptions of those meals. I think it is why reading these books always makes me hungry!
This was a creditable addition to Martin Walker's Bruno series. It was not the best of the lot; after all these books have become quite predictable and I could almost write one myself. But that is almost inevitable in a long series. It's impossible to make each entry in it fresh and new. Nevertheless, I always enjoy my visits to the Dordogne and this was no exception.
2022 3-star reads 2022 books Martin Walker