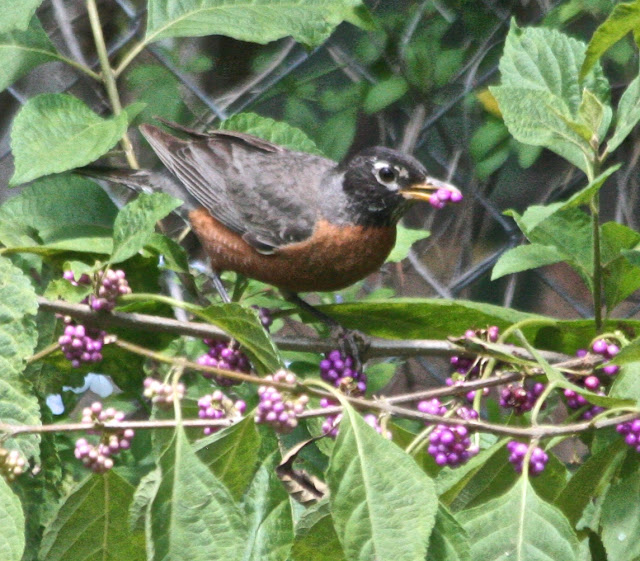 The beautyberries are ripe and that is always good news for the birds like this American Robin.

A new study warns that the planet is on the brink of five dangerous climate tipping points and indeed may have already passed some of them.

Meanwhile, a September heat wave is breaking records in the United States.

California has suffered a triple threat this week: a heat wave, fires, and a hurricane.

The heat wave in the West has broken records in California, which has suffered temperatures in excess of 110 degrees F.

Here in the Gulf region, things have been hot but quiet. No hurricanes to contend with so far.

Those wildfires in California have proved deadly. Two people died in the fires there this week. Prescribed burns in certain areas are being used to try to control the fires.

In an unusual move to help protect the critically endangered North Atlantic right whale, lobsters have been red-listed there because the whales frequently become entangled in the lobster nets and pots.

A highly virulent form of bird flu has been found in a bottlenose dolphin and a stranded porpoise.

Researchers said this week that large swathes of the Amazon rainforest have reached a tipping point and may never recover.

People continue to put their lives on the line to try to save that rainforest and sometimes those lives are lost. It happened again this week.

Farmers and ranchers are frequently at war with beavers but they would be wise to see them as partners in protecting the land.

In Canada, a woman walking along a beach with her dog found a fossil from an unknown reptile that is probably older than the dinosaurs.

A seven million-year-old fossil cranium found in Chad has provoked a rancorous debate over whether it is an ape or perhaps the oldest human yet found.

And in Georgia (the European one not the American one) a 1.8 million-year-old tooth belonging to an early human has been found showing that humans lived there at least that early.

The Yakima Water Basin in Washington provides a successful example of water management for areas like the Colorado River Basin where seven states need to agree on a plan of usage.

A new paper out this week warns of the need to protect Earth's 60,000 tree species in order to stave off global ecological disaster.

Three bottlenose dolphins that had spent years in captivity in a resort hotel were released into the open seas of Indonesia this week.

In India, an 80+-year-old woman has devoted her life to planting and nurturing trees in order to prevent deforestation.

A new study has revealed some striking differences between Neanderthals and modern humans in the development of their brains.

The persistent drought in Europe has brought some ancient monuments to light including a structure that is being referred to as the "Spanish Stonehenge."

Can an animal truly live forever? Maybe this jellyfish can.

Sea lions along the southern California coast are being poisoned by a naturally occurring neurotoxin that is present in tiny single-celled marine algae.

Elk in Virginia? Yes, indeed, and here they are.
*~*~*~*
Motion-triggered cameras in the Olympic National Forest in Washington have documented the presence of the Pacific marten, a rare native carnivore of that area.
*~*~*~*

Using Nature as a weapon in war? It may in fact be the ultimate weapon.