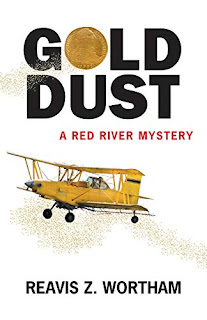 This book was a heady mix of cattle rustlers, murderers, grave robbers, CIA turncoats, and rural crime families, and all of it is centered in the little northeast Texas community of Center Springs. We experience it all mostly through the characters of teenage cousins Top Parker and Pepper Parker.

Top lives with his grandparents. His grandfather is the local constable, Ned Parker, who is charged with keeping the community safe and keeping the kids on an even keel. He's a man who has lived a lot of years and has garnered a lot of common sense along the way. His wife doesn't get as much ink in these stories, but of course, it is she who is the glue that holds everything together.

The plot this time involves government experimentation with a biological agent that is alleged to be benign but may not be. When a crop duster sprays the stuff over the area and Top comes in contact with it, the boy, who already suffers from asthma, lands in the hospital fighting for his life. His grandfather seeks answers for what has happened to Top and ends up heading to Washington, D.C. to find those answers.

There is a subplot here involving Pepper who found a mysterious gold coin and spreads some wild story about it which generates a "gold rush" in the area as strangers rush in to try to discover the cache of gold. Pepper is a headstrong girl and though she can be pretty annoying at times, I admit I quite like her.

This tale is set in the late 1960s and I felt that Reavis Wortham pretty well nailed the ambiance of the period in that part of the world. The dialogue among his characters and his descriptions of those characters seemed spot on. I recognized several of them among people I had known in East Texas during the'70s.

This is actually the seventh book in this Red River mystery series. I used to be a stickler for reading a series in order but I've given up on that - life is just too short. I have found, however, that most writers of series do a reasonably good job in each new entry of cluing the reader in on all the necessary background and that is the case with Wortham. I had read only one other book in the series (Unraveled which I read earlier this summer) but I still felt comfortable with what I knew about the recurring characters and their relationships. I may eventually go back and read some of the earlier ones whenever I feel the need for an undemanding comfort read.