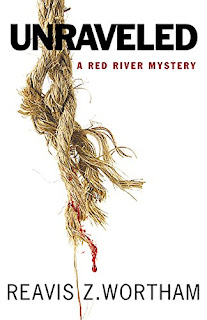 Reavis Wortham is an author who is new to me but he has written a number of books including those in the Red River mystery series. This book was the sixth in that series and even though I had not read any of the earlier books, I did not feel at all lost or confused by the action in this one.
The series is set in the (fictional) Northeast Texas community of Center Springs and the time is 1968, so I guess this would qualify as a historical mystery. The action kicks off when a car carrying the White mayor and one of his office employees who is Black plunges through a guard rail in a tight curve on Highway 271. The two occupants of the car are flung down the new Lake Lamar Dam and are killed. Each of the victims was married to other people and the community senses a scandal in their being in a car together. No one knows where they were going or what they were doing together.
All of this is viewed through the eyes of a White fourteen-year-old boy named Top Parker who lives with his grandparents in a little house near Red River. Top's grandfather is Constable Ned Parker, a man with a lot of common sense. Interestingly, there is a Black deputy named John Washington who seems universally respected in the community and there is also a female deputy! (In 1968 rural Texas? I don't think so, but then this is fiction.)
Top has a friend and cousin named Pepper.  I'm sure their relationship harks back to the earlier books that I haven't read, but Wortham does a really good job of establishing their emotional connection and bringing those of us who have not read the earlier books up to speed. They are well-drawn characters who seem to run around just being kids and they are easy to like.
The plot here involves a traveling carnival, racism, and a family feud that has smoldered for years. Two deaths threaten to spark the smoldering into a full-blown fire.
This was a quick and easy read. Once I got into the book, it held my interest and I found it hard to put down. Wortham does a good job of describing rural northeast Texas, a place I have some familiarity with. There are now eight books in this series and I believe more are probably in the works. But I think I might actually go back and read some of the earlier ones as well. They are undemanding, the characters are believable, and the writing overall is quite good.
2022 3-star reads 2022 books Reavis Z. Wortham