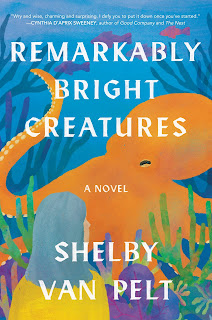 Marcellus McSquiddles - a name to reckon with. And it belongs to a creature to reckon with, a giant Pacific octopus who is one of the main characters and the narrator in Shelby Van Pelt's debut novel, Remarkably Bright Creatures. What a pleasure it was to get to know Marcellus and what a pleasure this book was to read.
Marcellus is a captive in the Puget Sound Sowell Bay Aquarium and he may be a genius among octopuses. (Or maybe he's just average; who knows?) He is clever enough to squeeze out of his tank in the aquarium and go roaming for a late-night snack. He is also sensitive enough to maintain a kind of relationship with the 70-year-old woman who cleans the space at night. Tova Sullivan is recently widowed and has volunteered as a cleaner at the aquarium. As she goes about her duties, she carries on a "conversation" with Marcellus who is her favorite.
Tova likes things to be just so, a place for everything and everything in its place. She is an assiduous cleaner. Her life has not been an altogether happy one. In addition to the recent death of her husband, thirty years before she had suffered the death of her 18-year-old son, Erik. Erik's body had been found at the bottom of a lake and his death was ruled a suicide but Tova has never believed that verdict.
A second line of the narrative follows a thirty-year-old garage rocker and odd jobber named Cameron. His mother had left him with her sister in a California trailer park when he was nine years old. She left him there and never returned. His life since has been one failure after another. In the hope of turning things around, he decides to search for his father in Sowell Bay and try to get money from him.
Cameron's story is compelling in its way. He finds a job at the aquarium where he meets Tova, and at this point in the story I began to suspect how it might end, but it didn't hinder my enjoyment of it.
More compelling for me though was Tova's story. She is one determined woman. She has decided that it is time to check herself into a nursing home and she proceeds with getting rid of her belongings and selling her house, the house that her father built. She has no children or grandchildren and, although she has devoted friends, she knows she must make decisions about her future herself. She is resolved that she will not allow herself to be a burden to others. She has an ally in Marcellus who it turns out may be able to help her resolve one of the mysteries of her life.
I have nothing negative to say about this book. I found the narrative thoroughly engaging as Van Pelt crisply moved her story along with no wasted asides. In fact, when I first finished reading the book, I had rated it as a 4-star read. But that was several days ago and on reflection, I believe it is worthy of a 5-star rating, my first one of 2022. And of all the characters I have met in books this year, Marcellus and Tova are definitely my favorite couple!
2022 5-star reads 2022 books Shelby Van Pelt