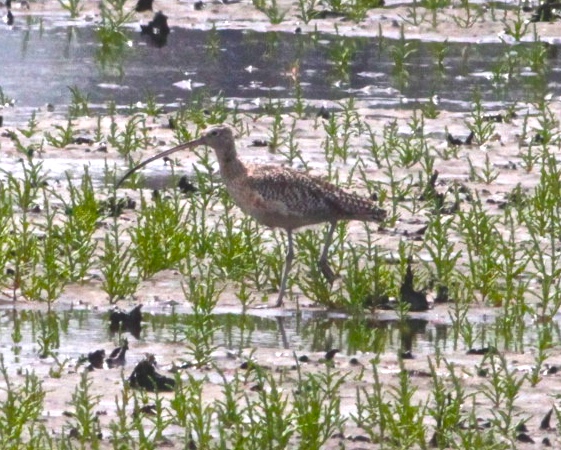 A Long-billed Curlew takes a walk along the Texas Gulf Coast.

The big environmental news this week has been the incredible heat that is burning the northern hemisphere. A record-breaking heat wave in Europe has been deemed a virtual "heat apocalypse" which has led to the deaths of hundreds on that continent. The UK has suffered its hottest day in history. Exacerbating the problem, a wildfire in France was actually started by an irresponsible human. The heat and drought have fueled wildfires in many places, including Alaska. Extreme heat alerts were issued for 28 states and temperatures of 115 degrees Fahrenheit were recorded in Texas and Oklahoma. Weather maps around the northern hemisphere were essentially all red.

But in Hawaii, the big news was water; specifically huge waves, some more than twenty feet high.

Meanwhile, Lake Mead in the Colorado River Basin has withered to only 27% of its capacity because of sustained drought over several years.

In Australia, thousands of dead frogs are turning up and scientists are at a loss to explain what is happening to them.

In some potentially good news for the environment, the Presbyterians have decided to divest from five oil companies after several years of debate. It would be great to see others follow their example.

In California, reservoirs are not necessarily the answer to the drought problem.

While much of the country is baking, the Northeast and Mid-Atlantic are enjoying a blissfully mild summer.

In 1957, the Thames was declared "biologically dead" but reports of its death were premature. The Thames is back, baby!

One of the ways that polar bears are adapting to the challenges of climate change is by scavenging garbage.

In the Salish Sea in the Pacific Northwest, the river otters are doing just fine, thank you! 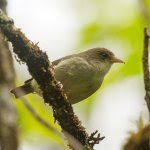 The American Bird Conservancy's Bird of the Week is the endangered Hawaiian bird, the 'Akikiki, pictured above.

Wild European bison have been returned to the UK for the first time in thousands of years.

A new report has documented that Australian wildlife is in serious decline because of a devastating combination of threats.

Tiger sharks and great white sharks are growing to tremendous proportions in the planet's oceans thanks in part to protected no-fishing zones. We may, in fact, "need a bigger boat!"

Penguins managed to beat the heat and survive by heading south to the colder climes of Antarctica.

Thanks to a 2020 volcanic eruption in Iceland, scientists were able to gain access to Earth's mantle, coming closer to an actual look at the planet's core.

The International Union for Conservation of Nature has added our Monarch butterflies to their endangered species list. And speaking of Monarchs, you can participate in the sixth International Monarch Monitoring Blitz on July 29 through August 7.

In Sri Lanka, the failure of the government's environmental policies is fueling popular protests and the resignation of the president.

There is a global initiative to plant a trillion new trees. Can that actually make a difference?

A new study postulates that the threat of global extinction may be even greater than has previously been thought.

Here's a look at some of the birds of Europe.

The world of Nature never ceases to amaze. And here is one more amazing thing: glowing fish.