Land of Shadows by Rachel Howzell Hall: A review 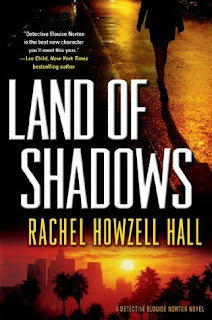 Los Angeles homicide detective Elouise (Lou) Norton and her new partner Colin Taggert are sent to investigate a suspicious death. A teenage girl's body has been found hanging in a closet in a condominium complex. Colin initially thinks that it is a suicide but Lou insists, correctly, that it is homicide.
Early in the narrative, we learn that Lou had an older sister, Tori, who disappeared twenty-five years earlier. Lou and Tori were at a neighborhood store owned by a man named Napoleon Crase when Tori was caught stealing candy. Elouise panicked and ran from the store. She never saw her sister again. The police investigated the disappearance but apparently not very assiduously and the case was never solved.
Lou is haunted by the disappearance of her sister. It may be one of the reasons she joined the police. Now, in a possible instance of karmic payback, it turns out that the apartment building where the dead teenager was found is owned by Napoleon Crase. Lou will have a legitimate excuse for investigating Crase who has been a thorn in her memory for all these years.
In a side issue, we learn that Lou is married to a very successful game developer who is presently in Japan. They do not talk often and it seems that the marriage ties are not very strong. Her husband has been unfaithful to her in the past. When he was caught, he bought her a Porsche SUV to buy her off. She suspects that he is up to his old tricks again.
As Lou and her partner pursue the case, they encounter a pretty sleazy cast of characters and find their investigation leading them down some twisted avenues, but she is undaunted and grimly determined to run down every lead until she finds out what happened and is able to bring some justice to the victim.
This was Rachel Howzell Hall's first book in what is intended to be a series and it was a good introduction to the character of Lou. Moreover, I found her descriptions of the setting in South Los Angeles to be quite believable. Consequently, I felt that I could "see" those streets and those people. They all felt real to me. Hall is the author of a number of books, including at least one where she paired with James Patterson to write. This was the first one of hers that I had read and I was sufficiently impressed to put her on my reading list. I hope to get to some of the other books in this series perhaps later this year.
2022 4-star reads 2022 books Rachel Howzell Hall