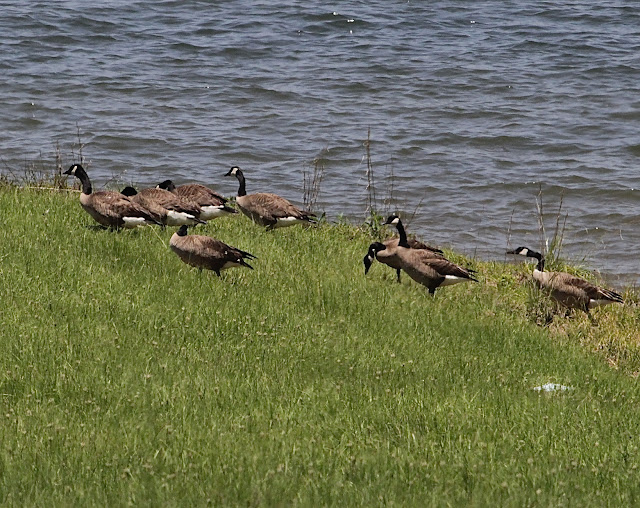 We watched a group of Canada Geese enjoy a graze along the Tennessee-Tombigbee Waterway in Mississippi during our recent road trip.

Discussing the recent Supreme Court ruling regarding the Environmental Protection Agency's authority, my husband commented that they are trying to kill us all. Based on this as well as some of their other actions, one could definitely get that idea.

The Federal Energy Regulatory Commission in its duties of setting policies on energy infrastructure and market rules, rates, and standards has a big role to play in supporting affordability and the transition to cleaner energy.

Climate change clearly plays a part in many extreme weather events around the world, but social factors also should not be discounted.

A second bison attack on a male tourist who got too close was recorded at Yellowstone National Park this week. And then before the ink was dry on that story, there was another attack; this time it was on a 71-year-old woman. No one has been seriously hurt to this point but that could change at any time. People need to keep well away from these powerful and unpredictable animals.

Lawns are water hogs, something we don't need in our present circumstances, but it is possible to have a beautiful and drought-tolerant yard without grass.

Lake Mead in Nevada is at a record low and its shrinking has revealed some grisly finds including human remains in a barrel.

Do we need a new theory of evolution? Some scientists seem to think so.

Countries have made pledges to reduce methane emissions into the atmosphere but a new study shows that these emissions are rising instead.

The rise of the dinosaurs may have been made possible by their covering of feathers which helped them to adapt to the cold.

In some places in the world, people put their lives on the line to protect and defend the environment. And sometimes that life is taken from them. It happened in Venezuela this week when an Indigenous leader of the environmental movement was shot dead.

The American Bird Conservancy's Bird of the Week is the "marsh seabird" called the Black Tern.

Can polar bears adapt to a life without sea ice? There is a group in Greenland that can.

A previously unknown species of crab dubbed Lamarckdromia beagle has been discovered off the coast of Western Australia.

Extreme heat waves are creating problems for humans all around the world.

A recently published study makes the case that fossils of early human ancestors found in South Africa are a million years older than was previously believed.

The general consensus is that dogs evolved from gray wolves, but it seems that the story may be a bit more complicated than that.

We are living in the Age of Extinction, a time in which fifteen carp species disappeared from a single lake.

The struggle for control of wildlife in the Greater Yellowstone ecosystem continues unabated as state agencies designated to ensure conservation receive much of their funding from hunters, and ranchers in the area often determine wildlife policy.

The UN Secretary-General has declared that there is an "ocean emergency" in which oceans may die unless we get control of our unbridled exploitation of the seas.

"Who's got two pseudothumbs and loves to eat bamboo?" Why, the panda, of course!

Genetics do not seem to play a part in the differences between dolphin whistles but the environment and population demographics do have an effect.

Arizona wildfires are sweeping through areas that have been inhabited by humans for centuries, including sites that are rich in artifacts.

Two incredibly cute baby skunks that somehow got separated from their family in Cambridge, Massachusetts were rescued by officers of the Cambridge Police Department. Good job, guys!

Hundreds of Little Blue Penguins are dying and their bodies are washing up on the northernmost coast of New Zealand. Scientists believe that climate change is the culprit in their deaths as rising temperatures in the ocean make it difficult for them to find their prey.

Kaleem Uhllah Khan has developed 300 types of mangos. He is rightly known as the "Mango Man."

There is an octopus boom in Cornwall but not everyone is pleased about that.

On Galiano Island, off the coast of southern British Colombia, residents are attempting to document every species on their island.

Those fantastic whiskers on seals have a purpose; they help the animals to hunt in the darkness of the deep ocean.

Here's a look at some of the magnificent and distinctive birdhouses of India.