The American Bird Conservancy's Bird of the Week is the Greater Sage-Grouse. The Sage-Grouse is one of the most prominent inhabitants of the sagebrush "sea" that covers millions of acres across 13 U.S. states and portions of a few Canadian provinces. It is considered an "umbrella" species meaning that efforts to conserve it also benefit many other species.
*~*~*~* 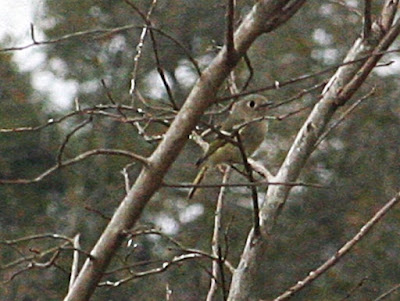 The bird of the week in my backyard is the Ruby-crowned Kinglet. The little birds have arrived in the area for their winter sojourn with us.
*~*~*~*
Cop26 is winding down. Has it been successful or not? Researchers from the world's top climate analysis coalition are not impressed. Their report says that the world is still on track for disastrous heating of 2.4 degrees Celsius by the end of this century. This is in spite of the pledges made by governments at this conference.
*~*~*~*
It turns out that the largest delegation at Cop26 was not from a single country but from the fossil fuel industry. There were 503 delegates linked directly or indirectly to fossil fuels.  This is according to the advocacy group, Global Witness.
*~*~*~*
Twenty-four countries and several automobile companies signed an agreement to end the sale of fossil fuel vehicles by 2040. However, the agreement may be most notable for those who didn't sign. The U.S., China, and Germany did not sign and the auto companies Toyota, Volkswagen, and BMW likewise did not sign, all saying that they had some reservations about the terms of the agreement.
*~*~*~*
The world's two biggest emitters of greenhouse gases, the U.S. and China, did sign another agreement, however. They jointly pledged to work together to slow global warming in this decade and to ensure that the Glasgow summit results in meaningful progress.
*~*~*~*
The U.S. Fish and Wildlife Service announced this week that it was reversing a rule promulgated by the previous administration that would have would have opened up millions of acres of West Coast forests, habitat to the endangered Northern Spotted Owl, to potential logging. The reason for the reversal was that the rule had been based on faulty science. Government biologists had objected to the rule at the time the administration announced it, saying that it would put the endangered owl on the road for extinction.
*~*~*~*
The climates of Europe and North America have been regulated for thousands of years by the circulating currents of the Atlantic Ocean which produce relatively moderate weather conditions. But now the effects of anthropogenic climate change have diminished the flow of the conveyor belt and there is recent scientific research that suggests it may be headed for collapse. This would be devastating for the two continents.
*~*~*~*
At the climate summit this week, President Biden announced a series of steps that this country will take to reduce our emissions of methane. Central to the plans is an Environmental Protection Agency rule that aims to cut methane pollution from the oil and gas industry to a quarter of 2005 levels by the end of this decade.
*~*~*~*
New research is suggesting that the role of salt marshes as powerful carbon sinks has been vastly underestimated and that we continue to ignore them and fail to protect them at our peril.
*~*~*~*
And now comes another dangerous effect from the COVID-19 pandemic. Mismanaged plastic waste consisting of things like gloves and masks has ended up in the oceans of the world. It's estimated that nearly 26,000 metric tons of the waste is now added to the plastic pollution of the ocean.
*~*~*~*
The Middle East and North Africa, already the hottest and driest regions on the planet, could become uninhabitable in the coming decades if temperatures reach 60 Celsius or higher.
*~*~*~*
As well as salt marshes, peatlands, too,  are vastly important as carbon storage units. A wetlands scientist in Wales refers to them as the "superheroes of the natural world."
*~*~*~*
Parts of the Thames River were once declared biologically dead but 60 years and decades of cleanup efforts later, it is now home to hundreds of wildlife species including seahorses and sharks.
*~*~*~*
Did you know that bees can scream? Apparently so, not with mouths but with their bodies. When they are threatened by giant hornets, Asian honeybees use their wings to create a noise that sounds like a cry for help and alerts the nest to the presence of their mortal enemy.
*~*~*~*
We think of Antarctica as a land of ice and it is, but it was also once a land of fire. During the Cretaceous period, an era known for fires that raged on every continent, Antarctica, too, was on fire.
*~*~*~* 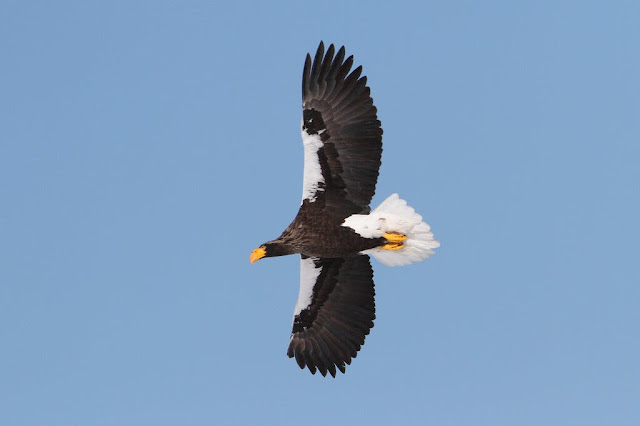 This is a Steller's Sea Eagle in flight. These birds are normally at home in China, Korea, Japan, and the east coast of Russia. They have been known to sometimes stray into Alaska but one has now wandered as far as the Atlantic Coast and may even have made a trip to South Texas. The bird may be seriously lost but its flight has set all kinds of new records for the species.
*~*~*~*
Hawaii's Kilauea volcano had been erupting in one form or another since 1983, but in 2018 from May to August, it produced its "magnum opus." It unleashed 320,000 Olympic swimming pools'-worth of molten rock from its eastern flank. Scientists learned lessons from the outburst that have changed how first responders prepare for eruptions in other areas.
*~*~*~*
Over the last half-century, as global heating has dramatically increased, the number of "fire weather days" in Northern California has likewise risen.
*~*~*~*
Over the centuries, New Zealand's population of sea lions was seriously depleted by hunting. They are among the world's rarest sea lion species but now they are making a comeback. Their numbers are increasing and they are turning up in the most unexpected places.
*~*~*~*
Anomalies abound in Siberia where parts of the region are up to 62.6 degrees warmer than usual. Flowers bloom and strawberries are ripening at times and places where they never would have before.
*~*~*~*
A new study shows that deer can catch coronavirus and can pass it on to other deer and to humans. One more thing to worry about with the pandemic.
*~*~*~*
Don't call it a moon they say but Earth has another space object besides our moon that is following the planet around the sun. Apparently, it was shorn off our moon by a meteor impact.
*~*~*~* 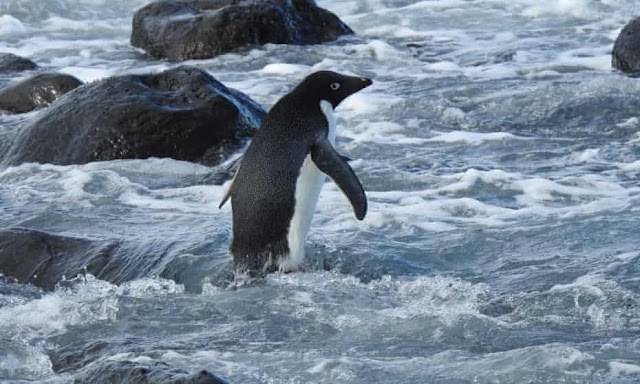 Yet another lost bird, this one, an Adélie Penguin from Antarctica, has traveled 3000 km of icy waters to land on the shores of New Zealand. New Zealanders have affectionately named him Pingu.
weekly roundup