The Promise by Damon Galgut: A review 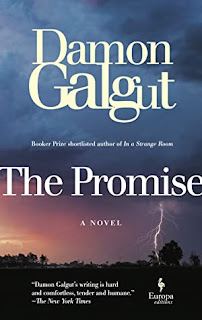 Can I share a shameful secret with you? I don't think I had ever heard of Damon Galgut before he won the Booker Prize for fiction with this book. If I had heard his name mentioned or seen it in print, it obviously did not register with me for I'd forgotten it. But he has actually published eleven novels beginning in 1983 when he was only seventeen. His works have been highly praised and some have won prizes and he had previously been shortlisted for the Booker in 2003 and 2010. He is also a playwright. His writing documents life in his native South Africa both during apartheid and after it was abolished.
This current novel details the experiences and actions of the Swart family who live on a farm outside Pretoria. There are three adult children. It begins during the apartheid period and stretches all the way to the present. When we meet the family, their mother has died and they gather for her funeral. Before she died, she extracted a promise from her husband that he would sign over to their Black maid Salome the house that she lives in. She had served the family for many years and had faithfully nursed her during her final illness. The promise was witnessed by the youngest sibling in the family, Amor.
There is much resentment in the family, especially from Pa because his wife had abandoned their conservative Christian faith and had returned to her Jewish roots. She requested a Jewish funeral and he complies but he's not happy about it. He resents all the trappings and traditions of the Jewish faith.
After the funeral, Amor reminds him of the promise that he made to her mother. It is clear almost from the first that he has no intention of fulfilling that promise. So things continue much as they had. Salome continues serving the family and continues living in a house that she had hoped would be legally hers. More cause for resentment, both from Salome and from Amor who expected the promise to be honored.
Years pass and eventually Pa dies also, leaving the older daughter, Astrid, in charge. Astrid was in her second marriage and had two children, twins. Once again, Amor brings up the promise that was made to Salome and urges Astrid to sign over the home to her. But Astrid has an acquisitive nature and does not want to give up any part of what the family owns. I think you can see where this is headed.
Meantime, Amor has moved on with her own life. She had been living in London prior to the death of her father. Returning, she decides to move to Durban and train as a nurse, a decision that confounds her family. This is during the worst of the HIV/AIDS epidemic and she takes a position nursing the victims of the horrible disease. She is disgusted with the behavior of her family, their excess drinking, marital infidelities, self-deceptions, and general moral bankruptcy. She cuts her ties to them. But then tragedy strikes and she has to be notified. The only one who has her phone number is Salome and she calls her to tell her that Astrid has been murdered. Once again, Amor comes home for a funeral.
Amor's brother, the middle child, Anton is now in charge of the farm. Amor approaches him as she had her sister and father previously and reminds him of the promise that was made to their mother long ago. He reassures her that he will take care of it but he continually finds excuses to delay the deed transfer. It's clear that it really isn't going to happen. Salome once again is denied.
More than thirty years pass since that original promise was made. Anton is a drunk who is an incompetent manager. Apartheid has now passed into history, but still, Salome and her son Lukas are tied to the land and the Swart family. And then the unexpected happens. Anton is found dead, a result of his overindulgence. Finally, ownership and management of the farm fall to Amor and there is nothing preventing her from accomplishing the deed transfer which she does. But now there are other threats to the land that make it less than valuable and Lukas views Amor's action as an empty gesture. He responds in fury.
This family's story appears to be Galgut's way of depicting the history of South Africa during this whole period; the squandering of opportunities and failures to live up to its promise are not just familial failures but a society-wide picture of moral insolvency. It is a portrait of a country with deep and abiding divisions as it attempts to put apartheid behind it and move toward a more equitable society. Galgut accomplishes all of this deftly and with great finesse. I suspect all of the praise and awards he has received over the years for his writing are well-earned.
My rating: 4 of 5 stars
books Damon Galgut reading reviews