Well, this is a nice change for American Bird Conservancy's Bird of the Week: It's a bird that is not endangered or threatened. In fact, it is increasing. It is the indomitable American Crow. It is an intelligent though often maligned and misunderstood member of the corvid family. It is resident almost everywhere in North America, throughout interior Canada and the continental United States. In the winter, they gather in large roosts for warmth and protection. Some of these roosts can number in the thousands.
*~*~*~*
Here are a series of maps and charts that explain the goals of Cop26 which has been taking place in Glasgow this week.
*~*~*~*
The pledges on greenhouse gas emissions made by countries at Cop26 could limit global temperature rises to below 2 degrees Centigrade, which would be the first time the world has been on such a trajectory.
*~*~*~*
India is pledging to reach net-zero emissions by 2070. The question is whether renewable energy will be able to meet the demands of the more than a billion residents of the country.
*~*~*~*
In order to effectively change our direction and get on the right track to reduce emissions, it is necessary to get buy-in from ordinary people and this means paying attention to environmental justice considerations.
*~*~*~*
Agreements to reduce methane emissions and to protect the planet's forests were key elements in the pledges made at Cop26.
*~*~*~*
Brazil was once a champion of environmentalism but no more. Under its present right-wing government, it has become an antagonist of efforts to slow climate change.
*~*~*~*
The world has pledged to stop deforestation before but we are still losing our forests at an alarming rate. According to Global Forest Watch, we have lost the equivalent of forests half the size of the United States and 10 percent of global tree cover between 2001 and 2020.
*~*~*~*
Here are five ways that climate change will affect plants and animals.
*~*~*~*
Carbon capture facilities offer some hope of being able to reverse climate change.
*~*~*~*
Beginning in 2019, the EPA stopped releasing crucial toxics reports. They withheld reports of substantial risks posed by as many as 1,240 chemicals. Reversing these policies is part of the clean-up necessary for the new administration.
*~*~*~* 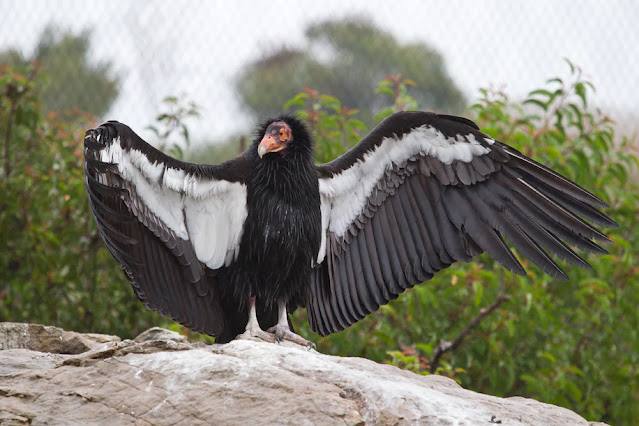 Showing off his ten-foot wingspan - a California Condor.
Parthenogenesis is essentially virgin birth in which an egg becomes an embryo without the introduction of sperm. Several animals, mostly invertebrates, are capable of this and some vertebrates are also. Very rarely do birds reproduce that way but now it has been found to have happened in California Condors. A report published in the Journal of Heredity in October confirms it.
*~*~*~*
You've probably never given a whole lot of thought to whale poop but whales are big animals. The eat a lot and they poop a lot and according to a new report published in Nature, that is a great thing. Their poop enriches the ocean and feeds lots of animals.
*~*~*~*
Alaska Airlines is getting rid of plastic bottles and cups for water. The change is expected to remove 22 million plastic cups and 32 million plastic bottles from flights through 2022.
*~*~*~*
Fireworks are normally a big part of the celebration of Diwali, the Hindu festival of light, which took place this week. There was a ban on fireworks this year but there was still expected to be enough to create severe air pollution in Delhi.
*~*~*~*
As Earth warms and the permafrost melts, old secrets and human artifacts as well as animals are being revealed.
*~*~*~* 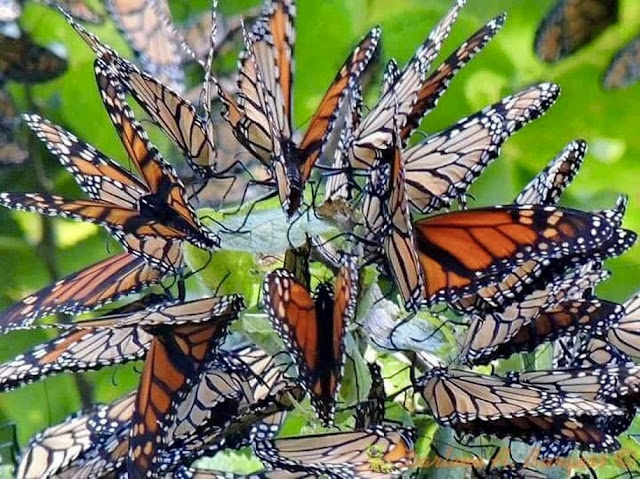 Monarch butterflies in their Mexican winter sanctuary.
On the Day of the Dead this week, Mexicans looked forward to the return of the Monarch butterflies that normally show up on this date. As well as celebrating the return of the butterflies, they honored environmentalists who have been slain, many of them protecting the butterflies' sanctuary.
*~*~*~*
Climate change is magnifying threats of flooding, fires, tropical storms, and drought to cities around the world and those cities are not adapting fast enough to meet the challenge.
*~*~*~*
Focusing on micro consumerist actions like giving up plastic coffee cups is not enough; we need to challenge the mindless pursuit of wealth that does not consider the consequences of its action. Capitalism is killing the planet.
*~*~*~*
Iraq is facing an intensifying water crisis. The problem, exacerbated by climate change, threatens to escalate the disputes which the country already has with its neighbors.
*~*~*~*
Tiny bog turtles are a seriously endangered species living in the western part of Massachusetts. Conservationists have been battling for decades to keep the species from disappearing altogether.
*~*~*~*
The Great Plains are suffering development at an alarming pace and that is threatening to cause America's native grasslands to disappear.
*~*~*~*
Facebook has been a hotbed of misinformation about and outright denial of climate change. It was revealed this week that ten publishers are responsible for 70% of the denial content. Most of them are from the political far right.
*~*~*~*
Every year New Zealanders vote on the "Bird of the Year." This year's winner has ruffled feathers; it is a bat! The pekapeka-tou-roa, or long-tailed bat, is endangered from predators invading its native forest habitat and voters evidently wanted to call attention to its plight.