Booked for a Hanging by Bill Crider: A review 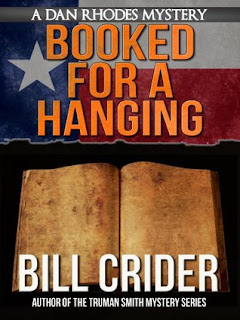 This book has languished on my reading list for months and I'm really no longer sure how it got there. I know it must have been recommended to me because it is not the kind of thing that I usually read but I'm not certain who I should credit for that. If it was you, then thank you. It was quite enjoyable and a fast read.
This is actually the sixth in the series about Sheriff Dan Rhodes of fictional Blacklin County, Texas, somewhere between Houston and Dallas. So, East Texas. I've not read any of the earlier books but this one worked well enough as a standalone. I'm sure I would have understood more about the recurring characters if I had read the earlier books, but the author did a good job of including essential information regarding the background.
The county is rural and quite sparsely populated and Sheriff Rhodes seems to fit it perfectly. He is an easy-going folksy kind of sheriff who knows the people of his county very well. Remember Sheriff Andy Taylor (Griffith) from tv? That kind of guy. His toughest jobs usually involve things like investigating for a stolen herd of cattle and he does a little of that in this book, but then a more urgent crime demands his attention.
A rare book dealer named Simon Graham has just moved to the county from Houston which seems a bit strange considering the demographic, but never mind. Graham had bought a dilapidated warehouse for his business. But then his body is found hanging in the building. The death has all appearances of suicide but Sheriff Rhodes' instinct tells him otherwise. And, of course, his instinct is right. As he gets into his investigation, he learns that Graham was in fact more of a conman than an actual entrepreneur which may go a long way toward explaining his move to Blacklin County.
Conman he may have been but he was rumored to have had in his possession a particularly valuable rare book and soon several interested parties have arrived on the scene to search for the book, much to the chagrin of the sheriff. But is one of them responsible for the man's death? Because, of course, it was murder.
Meanwhile, back at the jailhouse where Rhodes seems to mostly spend his working hours, the two jailhouse employees are in a dither of excitement over the installation of the department's new computer. (Maybe I missed it but I didn't see any indication of the time frame of the action of the novel, which bothered me a bit.) Rhodes is less enamored of the new instrument and still more likely to depend on his observations and instinct rather than on any information that the computer can dig up for him. He's worried that if he doesn't solve the murder soon, a Texas Ranger will be sent in to investigate and he doesn't want that!
The book's plotting is pretty predictable and holds no real surprises but it is smooth and the author obviously knows what he's doing. There's quite a lot of gentle humor, mostly from the activities of some of the eccentric oddball county locals. The character of Sheriff Rhodes is a thoroughly likable one and I can understand why this series is a favorite with many readers. This was a nice comfort read and a change of pace for me. And I especially appreciated the clever title of the book - a rare book dealer found hanging. Booked for a Hanging.
My rating: 4 of 5 stars
Bill Crider books reading reviews