The Sentence by Louise Erdrich: A review 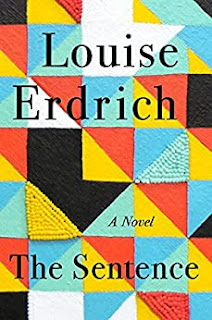 Acclaimed author Louise Erdrich who is also the owner of an independent bookstore called Birchbark Books & Native Arts in Minnesota has given us a new book that features an acclaimed writer named Louise who has an unnamed independent bookstore in Minneapolis. The book's Louise, however, is not the central character in the new book; that role belongs to an Ojibwe woman called Tookie.
Tookie had led a checkered life prior to her employment at the bookstore. In response to a friend's request, she had stolen the corpse of the woman's boyfriend, wrapped it in a tarp, and taken it across state lines to deliver it to another friend. It was a stupid but not evil thing to do. She was trying to help out a friend. What she didn't know was that the "friend" had duct-taped crack cocaine under the armpits of the man. Unlucky Tookie is found out and arrested by a tribal policeman. She is indicted and found guilty and sentenced to 60 years.
After ten years, Tookie's former friends confess to what they had done and absolve Tookie. That is the result of her lawyer and the tribal policeman who had arrested her having worked tirelessly to secure her release. Her sentence is commuted and she is released. She's able to continue her education and get on with her life.
During her imprisonment,  one bright spot and consolation for her was that she had learned to love books. Reading took her out of herself and her present circumstances. When she got out, she applied for a bookseller's job at that independent Minneapolis bookstore. Louise, who interviews her, does not ask about her work history or her stint in prison. Instead, she asks her what she is currently reading. Tookie replies that she is reading Almanac of the Dead by Leslie Marmon Silko. Apparently, that is a good enough recommendation for Louise. She tells her that it is a dark time for bookstores and that hers probably won't make it, but then she offers her a job.
Tookie's life is finally looking up. She has reconnected with the tribal policeman who had arrested her and the two of them marry. She loves her work as a bookseller. Then four years after she takes the job, the store's most annoying customer, Flora, dies while reading a book. And five days after her death, her ghost finds its way to the bookstore and starts haunting Tookie.
Flora was an apparent White woman who had always claimed to be Indigenous in a former life and she was obsessessed with all things Indigenous. She even brought a photograph to the store of a woman who she said was her great-grandmother and who she presumes is Indigenous. Tookie takes a look at the picture and concludes, "The woman in the picture looked Indianesque, or she might have just in in a bad mood." Wonderful line and the book is replete with such wonderful lines.
Flora's daughter gives the book that her mother was reading when she died to Tookie. The passage that was found open by her body is marked. When Tookie looks at the book, she superstitiously becomes convinced that a sentence in the book killed Flora.  Thus, the title of this book has a double meaning; it may refer to the sentence that Tookie served in prison or it may reference that killer sentence in Flora's book. Tookie tries to destroy this malevolent book but she is less than successful.
Then, in the midst of all this haunting and malevolence, the pandemic arrives. It's the spring of 2020 and at the corner near Cup Foods, a place where Tookie's husband often stops to buy things on the way home, the police kill George Floyd and the city explodes. Clouds of tear gas fill the air. And suddenly everyone wants to read about why people are so angry. The bookstore becomes a very popular place just as everything is beginning to close down because of the pandemic.
The Sentence is chock full of literary references and with descriptions of the ins and outs of running an independent bookstore, from dealing with publishers to packaging mail orders, or curbside and even home deliveries of books during the pandemic. It is quintessentially Erdrich from page one to the appendix featuring a list and sublists of Tookie's favorite books. The narrative is at times dark and at times laugh-out-loud funny. More often it features Erdrich's wry humor and her well-known dichotomy of interests in shamanic religion and Christian beliefs and in the nuclear family as opposed to tribal kinships. She is able to explore all of these in this wonderful book.
There is a point in the novel where Tookie is talking with Louise, her boss, and she tells her her theory about the book that Flora was reading containing a sentence that was powerful enough to kill her. Louise responds, "I wish I could write a sentence like that." Well, if anyone could...
My rating: 5 of 5 stars
books Louise Erdrich reading reviews