The Lincoln Highway by Amor Towles: A review 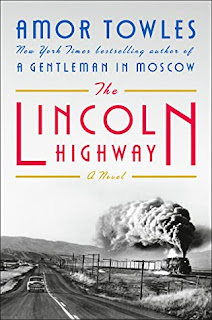 Amor Towles' latest features two young brothers, an older teenager and a pre-teen, who set out from Nebraska to go to San Francisco where the younger brother has hopes of finding their mother who left them years earlier. Their father has recently died and their home, a farm, is being foreclosed by the bank which holds the mortgage. They have to go somewhere and San Francisco seems like a good option.

It is June 1954 and eighteen-year-old Emmett Watson has just been driven home by the warden of the work farm where he was sentenced after being found guilty of involuntary manslaughter. His sentence has been reduced because of his father's death and the fact that his eight-year-old brother, Billy, has no other family to care for him. Emmett has a 1948 Studebaker Land Cruiser that he had bought with wages earned as a carpenter before being sentenced. His plan was to take his brother and head to Texas where he thought there would be work for a carpenter and he could support the two of them. Billy, though, is dead set on California and after some research at the library, Emmett decides that there's work for carpenters in California as well, so San Francisco, here they come!

Before they can hit the road on the Lincoln Highway, two of Emmett's friends from the work farm, Duchess and Woolly, show up, having hidden themselves in the trunk of the warden's car. They have escaped and now Duchess has a plan to get Emmett to take them to New York where Woolly, who is estranged from his wealthy family, will be able to access money left to him by his grandfather. Woolly is an innocent with a good heart and some undefined psychological problem for which he takes medication. Duchess is a user of people and I disliked him from his first "Ta-da!" I never changed that opinion even after I learned some of his sad history. Emmett is not interested in going to New York. He's ready to head west.

Unable to persuade Emmett, Duchess steals ("borrows") his car, and he and Woolly head to New York, stranding Emmett and Billy. Naturally, all the money they had was in the trunk of the car, so they are left with no money and no transportation. They manage to hop a freight train and head to New York to find Duchess and Woolly and the car.  Easy peasy, right? That was just one of the things about the book's plot that stretched my credulity.

Emmett and Billy are fortunate in finding friendly people along the way who help them out. After they leave, Sally, the young woman who had cared for Billy before Emmett was released, decided that she would drive to New York to find Billy and Emmett, and of course, she does, and of course, they do get the money (of Woolly's) that Duchess had promised. But there are a couple of tragedies that happen before the two brothers can finally head west on the Lincoln Highway.

I loved Towles' A Gentleman in Moscow and I dearly wanted to love this one, too, but I just couldn't. I can't really explain why but it never really "grabbed" me. The story was told from five different viewpoints, Emmett's, Billy's, Sally's, Duchess's, and Woolly's, which gave it a somewhat unfocused feel. It was a bit long, I felt, and could have used a stricter editor. The story seemed repetitive and it got rather tiresome for me. I started with a lot of empathy for the brothers, for young Billy particularly, but as the plot advanced, his constant perkiness just began to irritate me. It's certainly not a bad book, and I know many readers have really liked it, and I guess I liked it well enough but just not as much as I was expecting to.